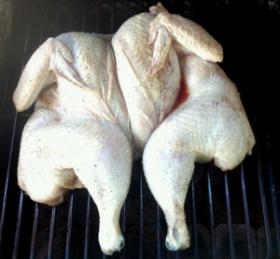 Canning. Knitting. Organic gardening. A new organization is teaching people skills our parents or grandparents might have been right at home with. It’s called The Homestead Atlanta, and it’s part of a larger cultural movement to teach and preserve skills that might otherwise be lost to time.

The most challenging class thus far? Chicken processing. In other words: learning how to take a chicken from coop to ready-for-the-oven, in just under 20 minutes.

Listen to the broadcast version of story that aired Thursday, Aug. 15, 2013.

On a recent Saturday at his seven-acre farm in Marietta, Daniel Seedorf—a tall guy with a blond buzz-cut, a prominent chin and a wide-open smile—stood before his group of about a dozen students.

East West Farm is not out in the country, but rather tucked in the suburbs of Barrett Parkway, not five miles from the red bricks of Marietta Square. 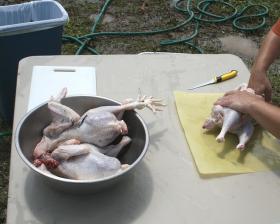 As Daniel himself put it during an earlier conversation, “We’re becoming weirdos.”

He motioned to the subdivision that borders the north side of their farm. “[T]hat’s how the people who live over here, I’m sure, kind of view us. Like, ‘What are they doing now? These wackos over here, chasing chickens and pigs and cows.’”

Chickens and pigs and cows are still pretty new to the Seedorfs. Not too long ago, they themselves lived in a subdivision. Then Daniel started reading farming blogs and becoming increasingly interested in the idea of leaving the 9-to-5 world behind.

That was two years ago.

At today’s class, everyone has the chance to watch what Seedorf calls a “humane” chicken slaughter, and to do it themselves, should they wish. Some of these students have taken the same leap of faith as the Seedorfs, and started their own farms, in places as diverse as Macon, Boone, North Carolina, and Alpharetta.

Other students, like Ashley Rivera, lead more conventional lives. “I’m just kind of a suburban mom,” she says, “and I’m not gonna change the world by raising chickens in the backyard.” 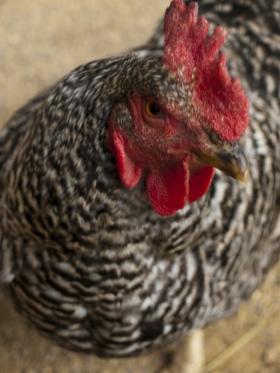 Rivera’s an urban planner in Atlanta’s Riverside neighborhood. Like many folks these days, her family has taken advantage of a deep in-town backyard to install a chicken coop and harvest the eggs.

What brings her here, then, to learn how to make those birds into dinner?

Violent roosters in the flock. Too many of them. That, she says, and a sort of generational imperative. Slaughtering and preparing chickens to eat is a skill her grandmother had, and her great-grandmother before her. Her own mother swore off raising yard birds, and Rivera says that reclaiming the skill-set in her own adult years feels like re-establishing something important in her life that she’d like to pass on to her own children.

Kirsten Simmons, a 20-something apartment-dweller from Atlanta with no kids of her own, runs a community garden with chickens. But she says she’s really here for a different sense of connection. “I’ve always thought that if I eat meat, that I should be able to go from live animal to dinner.”

Daniel Seedorf’s teaching style is brisk and earnest. He talks knife sharpness and technique. Also, the age of your chicken. (The older your bird, the tougher the meat.) Then, just before demonstrating the kill itself (a quick swipe of a short, sharp knife to the carotid artery), he slows down.

“Um, this is not something to be taken lightly,” he tells the assembled group. “This is not just wanton killing and everything.” Then he says a prayer, something he says he does before he kills any animal on his farm.

Seedorf says he’s noticed a disconnect in American society. “It’s a nutritional disconnect. It’s a physical disconnect, realizing where your food comes from but also, there’s a spiritual aspect. We have to be in tune with our surroundings, our environment and our creator, for nourishment.”

A lot of people here say they feel estranged from their food-sources, and alarmed about some of the practices common to the animal agriculture industry. That could really be an entirely separate story. Basically, it boils down to this: They want to regain a sense of reconnection to, and control over what they eat. That’s why they came.

At the day’s end, Kirsten Simmons says she’s gotten something else from the class, though. “It makes me feel like I can handle whatever life throws at me….You know, it’s like, if anything were to happen, I can handle my own food.”

Urban planner Ashley Rivera has a different sort of lesson. As she picks up her cooler, packed with ice and two plucked and eviscerated roosters she prepped herself, she says, “It would help to not name your birds.”

Her family gave just one of their roosters a name, and that’s the only rooster that escaped today’s carving knife. He’s still at home with her kids.

The Homestead Atlanta has just started its November roster of classes, including Weaving for Beginners, Hearty Soups and Artisanal Crackers, and Blacksmithing and the Home Forge.