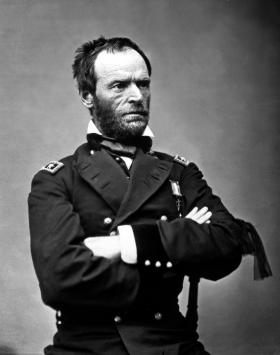 What should happen to a surrendered city during war-time? This is the question addressed in today’s installment of our “Voices of 1864” series…by none other than Union General William T. Sherman.

On September 2, 1864, the city of Atlanta surrendered to the Union. Mayor James Calhoun wrote to Sherman, asking his army to protect the civilians still living in Atlanta, as well as their personal property.

The general replied with an order demanding the complete evacuation of Atlanta citizens. Mayor Calhoun and the city council protested, claiming that most remaining inhabitants deserved special protection, since they had stayed due to age or extenuating physical or financial issues.

Sherman responded with this letter, written 150 years ago today.

This excerpt was read by Kevin Stillwell. WABE’s Kate Sweeney produced this series. Special thanks to the Kenan Research Center at the Atlanta History Center, which provided historical content, and to Jo Howarth Noonan.