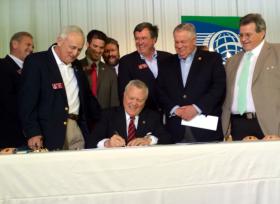 House Speaker David Ralston introduced Deal at the bill signing ceremony in Ellijay. He did so before a friendly crowd of at least 200, several of whom were openly carrying.

“This is the apple capitol of Georgia and, yes, it’s a community where we cling to religion and guns,” said Ralston.

The legislation expands gun carry areas to bars and government buildings that don’t already have security. It also empowers churches and school districts to decide if they want guns in their buildings.

“The Second Amendment should never be an afterthought,” said Deal. “Today we strengthen those rights guaranteed by our country’s most revered founding document.”

Critics have dubbed it the “guns everywhere” bill and several local officials across the state, from sheriffs to mayors, have expressed concerns.

County and municipal governments that don’t want guns in their buildings worry about the cost of installing security equipment. And some in the law enforcement community are troubled by a provision making it illegal for an officer to pull aside an armed person solely to check if they have a permit.

State Rep. Alan Powell, R-Hartwell, is one of the co-sponsors of the bill and addressed that point at the event. He cited recent court rulings upholding a permitholder’s 4th Amendment protection against illegal searches.

“Just by virtue of having a concealed weapons permit doesn’t give probable cause. You’ve got to be violating the law,” said Powell.

Meanwhile, some controversial provisions didn’t make the cut. Guns are still prohibited at public colleges and universities. Many lawmakers wanted to change that, but school presidents insisted it be left out.

Deal seized on that at the event, referring to the bill as bipartisan.