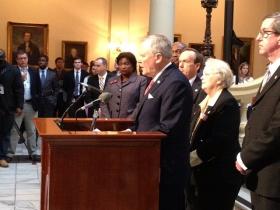 The governor’s decision comes after a unanimous recommendation from the state board of education last week to suspend the six members. Governor Deal announced he’ll appoint a nominating committee to recommend replacements for the six members. Governor Deal also commended DeKalb interim superintendent Michael Thurmond, whom he met with this morning.

“I think he fully understands the importance of the issue,” Deal said. “From my perspective and I think from everyone’s perspective, this is an issue that needs to be resolved quickly and as thoroughly as possible.”

However, the governor’s decision is being challenged in federal and state court, with two hearings scheduled later this week. Over the weekend, a federal judge reportedly issued an order that will not allow Deal to officially put any replacements in office until a Friday hearing. Attorneys for the DeKalb board say a state law allowing the governor to remove elected officials is unconstitutional. Today, Deal said he is operating within the law.

“We’re operating under the process that is before us and I think that it’s certainly something that all of us could say, ‘Well, maybe there’s a better way.’ The reality is this is the only way that is open to us at this point in time.”

The governor said he will sign the order this afternoon, and the six members will be suspended immediately.

The state hearing was required because DeKalb’s accrediting agency placed the district on probation for board governance problems.

There are three members of the DeKalb board who were elected after the sanction. The suspension will not apply to them.