Buckhead Atlanta, a luxury development project started nearly a decade ago as “Streets of Buckhead,” finally opened Thursday.An audio version of this story 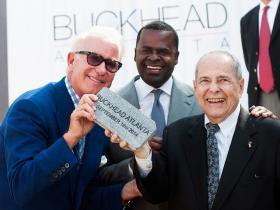 As the elite and wealthy gathered for the celebration, a quartet played the Stevie Wonder song, “Signed, Sealed, Delivered.” It seemed fitting for a project some thought would never happen.

“Today, Buckhead Atlanta goes from being the developer’s project to being the community’s destination,” said Hunter Richardson, an executive with project developer OliverMcMillan.

“It’s not a shopping mall,” said Oliver. “It’s the evolution of a street scene.” 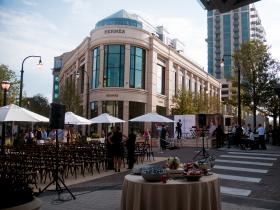 In order for the project to succeed, it must attract enough people willing to pay $1,600 for a Hermes sweater, or $1,200 for a pair of Jimmy Choo suede boots. Georgia State marketing professor Chris Lemley thinks Buckhead Atlanta will have no problem. 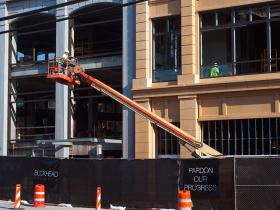 “Number one, they’ve picked the right spot,” Lemley said, adding that wealthy out-of-towners will be a likely draw due to the project’s proximity to high-end hotels.

“It’s a good market, and it’s nice to see the hole in the ground filled with something and coming back alive,” he said.

Those who want to do more than shop can live at Buckhead Atlanta. But the adjacent apartments command some of the highest rents in the city. A one bedroom apartment starts at about $2,600 a month.  Three bedrooms costs  more than $5,500 a month.

[You can see more photos from the Buckhead Atlanta opening event on the WABE Flickr page.]