Decatur residents are concerned. Home prices are rising, and the city is losing its African-American population.

On Monday night, city commissioners voted to approve a $109,000 contract to hold public meetings about how to keep the city diverse, welcoming and affordable over the next six months. The goal is to come up with a Community Action Plan document for city commissioners to adopt.

Since 1990, the African-American population in Decatur has dropped by half, according to a diversity study conducted by the city. Back then, African-Americans made up nearly 40 percent of the population. Today, it’s about 20 percent.

Casie Yoder, a spokesperson for the city of Decatur and co-author of the study on diversity in the city, says affordable housing is getting harder to find in the city, and that is a major concern. 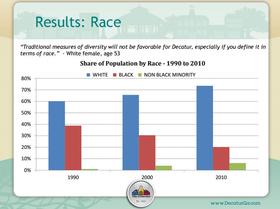 Yoder is a member of the Better Together Leadership Circle, made up of Decatur residents who volunteer to meet monthly to discuss race and diversity.

“The city of Decatur is only 4.41 square miles,” Yoder says. “So for a city our size to really want to talk about these things, I think that’s fairly unique.”