Researchers say the United States is short on students who are pursuing science, technology, engineering and math careers – the group of subjects known as STEM.

And educators worry that even fewer students from minority and low-income backgrounds are receiving a high-quality STEM education.

At the McNair Discovery Learning Academy in Decatur, principal Brian Bolden is hoping to use fish to change that trend. 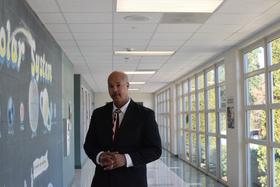 At 6’1″, Bolden’s broad shoulders block the door to a classroom.

“We are working on a top secret operation in alignment with our vision to become internationally recognized as a school of excellence in science, technology, engineering and math,” Bolden said. “So we keep this door secure. It’s a secret formula that we’re working on.”

When we step inside this secret classroom, a handful of first-graders are standing around a brightly-lit, indoor garden that takes up a quarter of their classroom.

Along with their teacher, these six-year-olds have created what’s known as an aquaponics system. It’s like hydroponics, which involves growing plants in water without soil, but with the added element of fish. 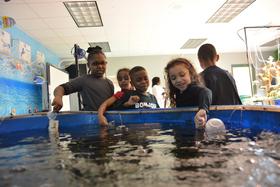 Students giggled while they explain how the 300 tilapia and bluegill swimming in a large tank next to the plants are providing the nutrients through the fishes’ waste for the plants to grow.

The water from the tank goes through a filter before it’s pumped up to a growing tray where the roots of the plants are submerged.

The plants under the grow lights include cabbage, cucumbers, strawberries, cilantro, peppers, turnips, arugula and bananas.

“We love science and we love technology, but we thought that maybe if we looked at a different aspect of science and technology to also support a human need, it would impact their lives more. That’s why we decided on aquaponics,” first-grade teacher and McNair Discovery Learning Academy’s STEM coordinator Kajia Spencer said.

McNair Discovery Learning Academy is in a zip code where nearly 30 percent of the population live below the poverty level.

Almost all of the students at this elementary school are on free or reduced price lunch. 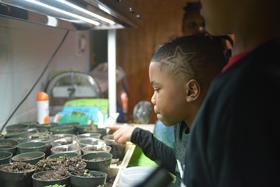 Spencer lives in the same neighborhood as her students. She described it as a community of mostly renters on the cusp of Atlanta and Decatur.

“For some of these children, eating is an issue,” Spencer said. “Providing an opportunity for them to learn about how they can provide for themselves will give them and their families an opportunity to not have food be a burden: where they can focus on academics and education, rather than ‘Am I going to eat tomorrow?’”

Spencer teaches a lot of the textbook science, but she said there’s a reason the students hands are covered with dirt.

By the end of the school year, she expects all of the students to know how to grow their own plants in their backyards or even in their living rooms.

The bigger idea is to expose students to lucrative science and technology careers. Bolden hopes the students can move up the economic ladder.

“It’s an area that they deem a ‘low-income school,’ but I tell my children all the time, ‘Be very, very careful with titles,’” Bolden said. “Even at a young age, we tell them all the time that you have to learn how to turn a problem into a profit.”

He doesn’t want his students to feel like there’s any limit to the income they can earn. That’s why he’s promoting STEM with modern equipment, which is not always the case for a school serving poor students. 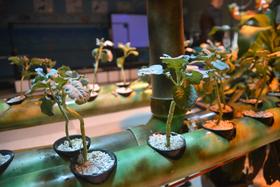 Laron Walker, the co-founder of MySTEMKits, a small company that provides schools with affordable science tools, said it’s all about exposure.

“Affluent school districts, they have every resource they need to have access to,” Walker said. “The major companies in this space drive their products based on prices. So if you get into other school districts in poor communities, they can’t afford access to this technology. So since kids are not able to see it in use, they don’t know it exists. They’re using antiquated methods, which makes them think these STEM-related careers are boring.”

Walker called himself lucky. He was accepted into Atlanta’s Douglas High School, when it had an engineering magnet program.

In McNair’s case, DeKalb County Schools decided to invest in technology like aquaponics. The company, HATponics, based in northwest Georgia, installed the system in the fall.

Through HATponics, students at McNair have been Skyping with a school for the deaf in Jamaica to help them set up an aquaponics system and share experiences.

First-grader Jumarkis Robinson has been in the class only a few weeks. He said he now wants to become a farmer.

“When I grow up, I want to grow food for the ones that are hungry so they won’t die,” Robinson said. “Because I don’t like people who like to starve to death. I like people living.”

When the strawberries, peppers and other fruits and vegetables are in full bloom, students will give the food away to local food banks.

“Some people would say, ‘How will they be in a position to help somebody else?’ That’s exactly how. Because they understand what it is to be in an environment where they may not have every single thing that some other people have. But they understand one very important principle: It’s more blessed to give than it is to receive,” Bolden said.

He said he hopes to freeze and ship some of the produce abroad.