Right near the federal penitentiary on the south side of town, there’s a plot of land known as the old Atlanta Prison Farm. It’s owned by the city, but is outside the city limits in DeKalb County. That’s one reason the land is overgrown and the buildings have decayed, but a group called “Save the old Atlanta Prison Farm” hopes to turn the area into a park that could be one of the biggest in the region.

Frances Blackmon lives one house down in this quiet neighborhood. She said that, in the two decades or so she’s lived here, she’s never set foot on the property.

“There’s a lot of people who probably take dope and everything else over there,” Blackmon said. “You don’t ever know what goes on over there. I don’t ever go down there. It’s just going to waste, when you could really put something over there. Some kind of stores or something … a park, whatever.” 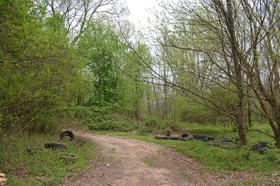 This land used to be the Honor Farm, a place where Atlanta prison inmates served time by farming. The farm was started in 1918 as a rehabilitation facility for low-risk offenders. The men who worked there farmed crops and raised pigs and cows to feed the local prison population. According to Scott Petersen, the leader of the “Save the Atlanta Prison Farm” group, the now-wild landscape would 30 years ago have been broken up into rows of corn and wheat.

In the mid-1960s, the city of Atlanta bought the prison farm from the federal government and divided it up. About one-third of the original property remained a farm that grew increasingly overcrowded and dilapidated. In 1995, the farm closed and nothing really took its place.

“We think what this is is an abandoned park,” Petersen said.

It’s also an area about twice the size of Piedmont Park, but the city of Atlanta says it’s closed to the public. That doesn’t stop Petersen from leading frequent tours of the property. On these tours, he leads others down a lightly used path, at times clearing his own trail with a machete.

The unofficial entrance to the old Atlanta Prison Farm is a break in a wall of overgrown bushes. The ground is littered with tires, plastic bags, furniture and other trash. Petersen said people sometimes use this land for sinister purposes.

“Unfortunately there are a lot of knuckleheads that come out here,” he said. “There are people who have criminality in mind. They drop off dying and abused dogs from dog fights. There have been people robbed out here. This can be a rough place.” 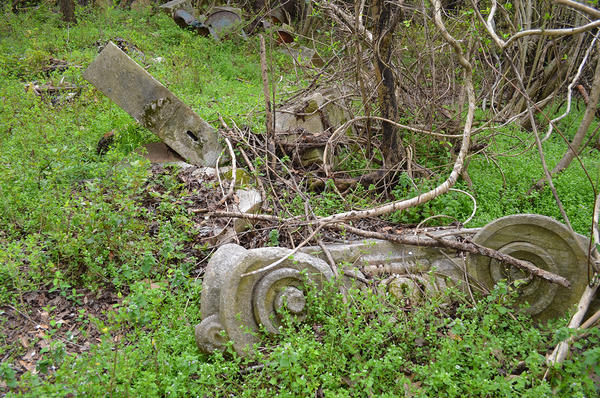 This land has been used for storing other, stranger things. According to Petersen, the graves of zoo elephants and the large, gray marble stones that are the remains of the old Carnegie library downtown, which was demolished in the 1970s, can be found on the grounds.

As you walk, the landscape changes abruptly, from an open clearing to a forest of young pines to a grove of short, white birch trees. Petersen sees each slice of nature as full of unique possibilities. 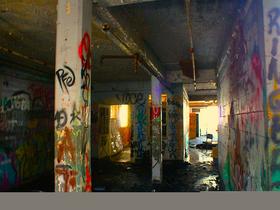 “We could see so many great things happening here,” he said. “For example, in this upper highlands area, it’s got a nice incline. I think this would be left for a passive park space. But in addition to it, on the areas that are flatter, why not build a collection of athletic fields?”

The crumbling buildings that once housed prisoners are now so dangerous and, Petersen says, toxic that he won’t take people inside. He blames the city of Atlanta for polluting DeKalb County.

These buildings are covered in graffiti, and have attracted urban explorers and even filmmakers. Indie horror movies and big-budget films have used this space – most recently, the Arnold Schwarzenegger action flick “Sabotage.”

DeKalb County Fire Chief Eric Jackson is familiar with these buildings, because they’ve been set on fire multiple times in recent years.

DeKalb County battles the blaze even though this land is city of Atlanta property because it’s outside the city’s borders. And that, according to Petersen and city and county officials, is the root of the problem. 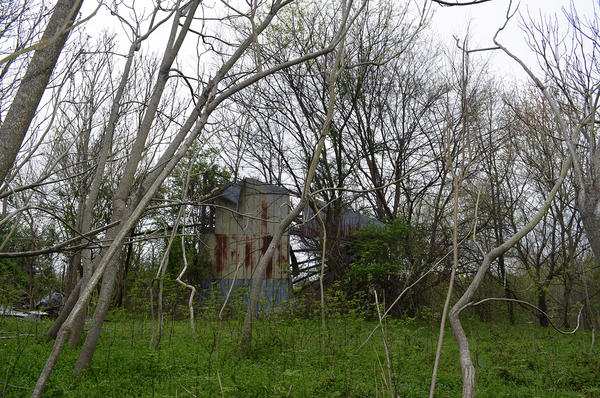 John Lavelle, the director of real estate for the city of Atlanta, said the city is still trying to figure out what to do with the property.

“We could sell it, trade it or develop it. We have some public safety needs that have to be addressed, and it’s in consideration for that. We have some park needs that the city is looking to promote. But this is not in the city, so we can’t develop a park not in the city. We’ve been in some discussions with DeKalb County. We just don’t know what to do with it yet,” Lavelle said.

Those discussions have been on and off for the past 15 years. DeKalb County did buy part of original property a while back, and has turned it into what is now Intrenchment Creek Park.

On Tuesday, May 5, Scott Petersen tried again to get the county to buy the rest of the Prison Farm property by presenting his case at a meeting of the DeKalb Board of Commissioners. In the end, there was no vote, but the commissioners and DeKalb County CEO Lee May agreed to talk with the city of Atlanta about the property.

“The pictures that you see in there, I see code enforcement violations in there and all of that,” DeKalb Interim CEO Lee May said. “And that’s priority number one. Number one is see what we can do to ensure the cleanup of that site. I think it’d be appropriate to begin to open up dialogue with the city again. I’ll reach out to the city.”

If the city will listen, the old Atlanta Prison Farm could overcome its murky past. At least, that’s what Petersen believes when he walks through the space.

“It has history of brutality,” Petersen said while walking through the area. “It has beauty. It has great space and freedom. It’s like the new frontier … the new South. It has pollution problems. It has just all kinds of contradictions.”

Petersen’s group is pushing DeKalb County to clear up those contradictions. He believes the county has money left over from a 2006 infrastructure bond to do just that.