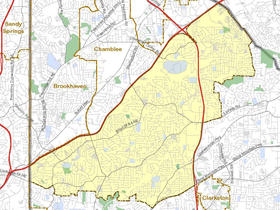 The deadline has passed, and three groups trying to form new cities in central DeKalb County cannot agree on a map. So what does that mean for their prospects in the 2015 legislative session?Broadcast Version

Lakeside, Briarcliff, and Tucker scrambled at the end of this year’s legislative session to agree on a map for three new cities. In the end, lawmakers threw up their hands; the spirit of compromise had worn thin under the Gold Dome.

To head off a repeat next year, lawmakers told the groups they would have to agree on a map by this past Saturday or a House committee would draw it for them.

Lakeside and Briarcliff came together to create a proposed city of LaVista Hills and released the map on Monday, Nov. 17.

“Now that we’ve seen it, studied it a little bit, I think it becomes evident to a lot of people that it’s not just a simple matter of resolution,” said Michelle Penkava who is with the group Tucker 2015.

“We really do regret that we could not resolve those differences,” said Allen Venet. Venet formally headed the Briarcliff City Initiative and is now one of the leaders of group pushing to form LaVista Hills.

Venet says his group met several times with Tucker proponents, and one of the big areas of disagreement was expected: the commercial area surrounding Northlake Mall. Venet says some residential neighborhoods, especially those on Livsey Road and in the Evansdale and Pleasantdale areas, were also bones of contention.

However, Venet says he believes it is not too late to compromise, telling WABE, “If we go into that hearing room and say, ‘You know, even since the deadline, we’ve worked it out,’ we can’t help but think that would be good for everyone.”

Venet says LaVista Hills is willing to keep talking, and Tucker’s Penkava says the same thing, but she says her group’s focus is now on the next step: the House Governmental Affairs Committee.

State Representative Amy Carter of Valdosta heads that committee. She did not return out calls by deadline but has said previously, unless all three groups agreed by the deadline, her committee would draw the boundaries itself.