Starting next year, DeKalb County’s 450 sanitation workers will have a new route to air their grievances, and they will have a union with them.An audio version of this story 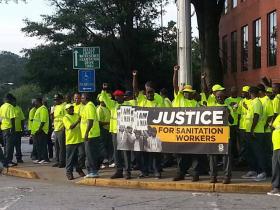 Resources, instead of having to go to their department heads. And the County will recognize Teamsters Union Local 728 as the workers' representatives.

Teamsters organizer Ben Speight says this is a victory that has been decades in the making. “These workers have been fighting for a union and calling for a voice on the job since the early 1970s.”

Speight says the workers now have that voice. Robert Pruitt, who has worked for the DeKalb Sanitation Department for more than twenty years, thinks it is about time. He says workers have been ordered to use unsafe equipment and they’ve been understaffed for years. But what Pruitt says he really wants is respect from management. “We just don’t want it to be their way or the highway,” said Pruitt. “And treat us like we’re human.”

The first monthly meeting between the workers’ representatives and the county is set for January.