The board unanimously agreed to extend Thurmond’s contract, which otherwise would’ve ended in February. His annual salary of $275,000 won’t change.Thurmond said he’s pleased to stay in DeKalb.

“We made a significant amount of progress, but there’s work to be done,” he said. “And I think it’s just in the best interest of the district. We need stability, and to have an additional turnover as it relates to superintendent right now, with SACS pending would not be a good idea.”

SACS, the Southern Association of Colleges and Schools, placed the district on probation in December for inadequate board governance. Since then, the governor has replaced two-thirds of the board and Thurmond was hired after the board ended former superintendent Cheryl Atkinson’s contract. 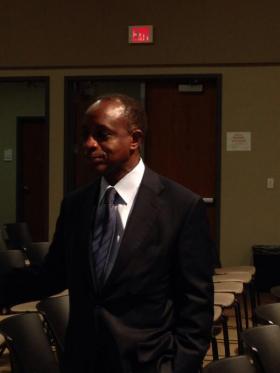 But originally, Thurmond only agreed to stay for a year. At an April board meeting, Mark Elgart, the head of SACS’ parent organization, told board members they needed to think long-term.

“You cannot have the superintendent position be a rotating position,” Elgart said. “You cannot have it constantly going in and out based on political differences.  If you have the right person, you need that person in place for a longer time to make a difference in a system of this magnitude and complexity.”

The extension will keep Thurmond in DeKalb through the next school year. But after Monday night’s board meeting, he insisted he won’t stay on after that.

“This is the last extension,” he said. “I just want to make that clear. I’ve enjoyed my time. I’m still enjoying my time. But I know that I’m a transitional leader. And my goal is to restore stability and then turn it over to a more traditional candidate.”

Board chair Melvin Johnson hopes that will happen by the end of Thurmond’s tenure.