Monday, a fourth suspended member of the DeKalb County school board appeared in court in an attempt to reclaim his seat.Listen to the audio version of this story.

Jesse “Jay” Cunningham testified he deserves to be reinstated.

Cunningham, who represented himself in court, called seven witnesses to testify on his behalf. Some were school system employees, others were DeKalb parents. PTA president Tanya Graham testified  Cunningham was an involved board member who cared about students.

“Mr. Cunningham would come to our meetings, he would provide us input,” Graham said, “We would ask him questions about how we could figure out what to do for any issues, maybe how the school board could help or what was his personal experience?”

But state attorney Jennifer Colangelo argued Cunningham and the other board members were suspended because they were ineffective, not because they weren’t concerned. She called Kenneth Bergman, the chief legal officer with DeKalb’s accrediting agency, to testify. Bergman said all of the board members had trouble prioritizing the needs of the entire district above the interests of the part of the county they represented. 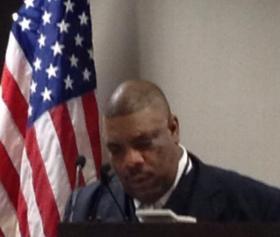 “The board really struggled with that concept,” Bergman said, “Their first and foremost issue tended to be that they needed to get re-elected, so they need to go ahead and meet the needs of their constituents first.”

Bergman didn’t offer any specific criticism of Cunningham. After the hearing, Cunningham said he thought he made his case.

“I think I demonstrated that I have the skills and the knowledge to be reinstated back on the board,” Cunningham said, “What I would bring is my experience, with the time I’ve been on the board.”

DeKalb’s accrediting agency placed the district on probation in December due to poor board governance.  The state board recommended to Gov. Deal that he suspend and replace two-thirds of the school board, which he did.

Cunningham is one of five suspended members appealing the governor’s decision. Administrative Law Judge Max Wood will make a recommendation to the governor, who will have the final say. Wood said he hopes to make a decision regarding Cunningham’s case in 30 days.