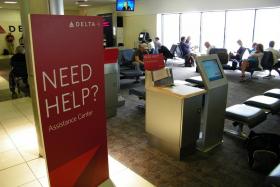 Delta is fighting, but in a most unexpected and unusual way.An audio version of this report

“Delta really welcomes additional competition at Hartsfield,” airline spokesman Trebor Banstetter tells WABE. “We’re willing to work with the airport and any airline to ensure the gates and facilities are available.”

Yes. That’s Delta saying to its competition, ‘If you want to come to Hartsfield, we’ll help you’ (in so many words).

But only if you want to come to Hartsfield.

In other words, don’t go to Paulding County.

In talking about Paulding County’s plans, Miller said airlines would face operating costs there of $50 per passenger, making it cost-prohibitive.

That’s about 10 times the cost of Hartsfield-Jackson.

“I don’t know where that number is coming from,” says Brett Smith , head of Propeller Investments. The New York-based company is working to develop Paulding County into an alternative to Atlanta’s main airport.  ”It’s not $50 a passenger.”

An airport spokesman tells WABE Miller was referencing a consultant’s report from a few years ago that pegged operating costs at $50 a head.

It wasn’t, apparently, based on any specific Paulding Co. numbers.

Propeller’s Brett Smith says the county will waive landing fees for at least the first year.  After that, he’s not sure what the costs might be:

At this point, however, it’s all preliminary.  Neither Smith nor Paulding County have said what airline is interested in landing there.