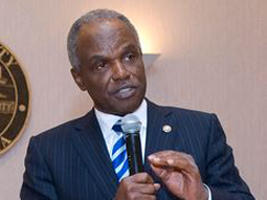 WABE's Denis O'Hayer spoke with Georgia Democratic Congressman David Scott about why the President and  Congressional Democrats are rejecting the drive by House Republicans to make changes to Obamacare, as a condition of approving continued funding for the Federal government.

The standoff resulted in a partial government shutdown which began on October 1, 2013.