It’s a fact that most Atlantans have heard, many have seen and a number have experienced first hand: Atlanta’s roads can be dangerous for pedestrians. Just earlier this year, the city was ranked eighth highest for pedestrian fatalities in the country.

But among all the roadways in Atlanta, Buford Highway–notorious for its lack of sidewalks, speedy traffic and long gaps between crosswalks–has developed an especially deadly reputation. Dozens of pedestrians have been struck and killed along the seven-lane roadway in the past decade and a half.

Yet, changes that could improve pedestrian safety along the dangerous corridor are now underway. Sidewalks, road medians and pedestrian beacons are being installed in a 2.3 mile stretch of the roadway as part of a construction project from the Georgia Department of Transportation. And according to two local advocates, those changes could make a big difference. 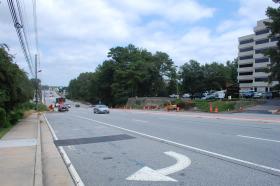 To learn more, listen to our interview with Sally Flocks, CEO of the pedestrian advocacy group PEDS, and Jeffrey Tapia, Executive Director of the Latin American Association: