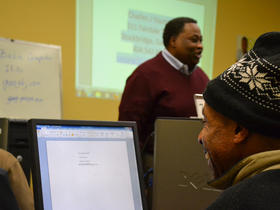 “We have some seniors who are on fixed incomes who cannot afford it. Affordability should not be a disconnect,” Seay says.

A Comcast spokeswoman says the program is staying focused on students, though it could evolve.

For seniors, cost isn’t the only barrier.

“The world has gotten smaller, but you have to embrace technology to be connected,” says Seay. She’s encouraging people who grew up with radios to give texting and Facebook a try. “So that’s been the goal. That’s really what I want to do, is not leave that population behind.”

It’s not just seniors who are getting left in the dust. There are plenty of people in their 40s and 50s who are on the wrong side of the digital divide.

Take Leonard White, 49. He’s starting a ministry, and one of the things he needs to do, he says, is build a website. “My computer skills is sub-par,” he says. White says he needs to catch up on basic computer literacy: How to navigate the Web, how to use Microsoft Word and Publisher.

That’s what brought him to a computer basics class at the Atlanta-Fulton Public Library. There are six other people there on a Wednesday afternoon. Most, but not all, have email addresses. They’re all in their 40s and 50s. For many, the previous jobs they had never required computer skills.

“We start with the basics,” says reference librarian Charles Young, who teaches the class. “Just how to hold a mouse, right click left click. How to pull up a Web page, and how to move around a Web page.”

Young teaches here who are looking for work, but don’t know how to use Microsoft Word well enough to put a resume together. He says there are a lot of people who have fallen through the cracks when it comes to technology. They didn’t learn it in school; their old jobs didn’t require it; they don’t have computers at home. 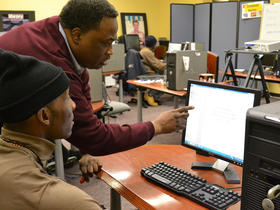 “If you want to fill out a job application, you have to go to a kiosk, and you have to type it in,” says Young. “Well if you don’t know how to use a computer, that sets you miles and miles apart from anyone.”

There’s not hard data on how many people are behind, or what the effect is on Atlanta’s economy, says Mary Margaret Garrett, the director of the Atlanta Regional Workforce Board.

“We have a lot of anecdotal information,” she says. “We have the individuals that are actually coming into our career resources centers. Some have a few computer skills. Some have never touched a computer.”

Garrett says the skills gap is well-known. We hear often about the lack of software engineers and developers in Atlanta. But that skills gap exists for jobs in warehouses and factories, too.

“Here in Georgia, we still have relatively high unemployment rate,” says Diane McCants, senior director of income at United Way of Greater Atlanta. She says many of those unemployed have limited computer skills, and they’re missing out as the unemployment rate goes down.

“Across the board the numbers may be going down, but what is starting to become obvious are these pockets” of populations, such as those working-age adults who lack computer skills, says McCants.

“We want to make sure that when those opportunities like a Mercedes-Benz come in, that there is an opportunity for those individuals who already live here to be able to take advantage of that,” she says.

To do that, they have to cross that digital divide. Young says people – even in their 40s and 50s – shouldn’t be afraid to make the leap.

“That’s what libraries are for, changing lives,” says Young. “And they want to learn. If you find someone that wants to learn. We’re here to help.”

Besides the library, United Way offers classes. And there are many other programs [PDF] from the Atlanta Regional Commission, churches and other nonprofits.