Fans of the Oakhurst Dog Park in Decatur are trying to keep part of it from being sold to a developer. The land belongs to the Boys and Girls Club of Metro Atlanta.

The park has two sections. On the right, there’s a big sunken lawn; to the left, a tree-covered hill with curving paths. One weekday morning, about a dozen dogs churn around. Sometimes a couple break away to tear across the lawn after each other. Their owners hang out in wool hats, holding mugs of coffee.

A developer approached the Boys and Girl Club, wanting to build two houses on the hilly part of the plot.

“We think it’d be a huge loss to lose the forest. And to lose this community-building dog park,” said Charles Willi, there with his dogs, June and May. 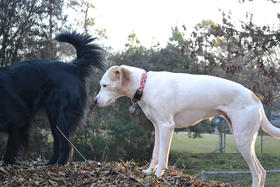 Kate Tuttle said she visits every weekday with her dog Coco. “I came for the dog, but I stayed for the people,” she said.

Tuttle and Willi are some of the people trying to keep the park in one piece.

“We expected there may be some concern about what would happen to trees, what would be egress, if it would be too crowded,” Collins said. “But what we did not realize was that this particular parcel was considered by the citizens in Oakhurst, to be a part of the dog park.”

Collins said it doesn’t make sense for the nonprofit to hold onto land it’s not using.

The lower area would stay a dog park, Collins said.

“We don’t want to have ─ ever ─ an adversarial relationship with the community in which we’re located,” Collins said. “I would welcome a way that we could find a win-win.” 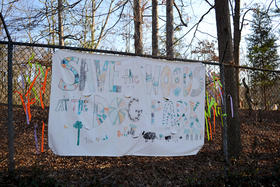 The dog park regulars had a similar sentiment.

“There’s a really strong sense that they’re a good part of the community and we value them and the work they do as neighbors,” said Denis Gainty, who was at the park with his terrier-mix, Wilbur. A couple years ago, Gainty said, he and his neighbors raised $15,000 for the organization with a soapbox derby.

“I’m hopeful that the Boys and Girls Club, and the city and everybody involved can come up with a good way to sustain their mission that doesn’t involve the short-term gain and then the loss of an invaluable resource,” he said.

The Decatur planning commission is considering the developer’s proposal.