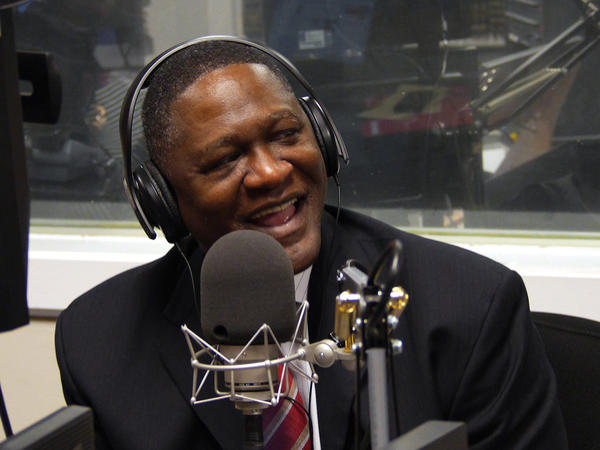 Dominique Wilkins scored over 26,000 points while playing in the NBA.

On Tuesday, Wilkins sat down with WABE’s “A Closer Look” hosts, Rose Scott and Denis O’Hayer, to talk about his current role as executive with the Atlanta Hawks. But he also reminisced about his days on the court with the Hawks, going toe-to-toe against Larry Bird in the playoffs, getting roughed up by Darryl Dawkins and trying to emulate Julius Erving as a young kid.

Wilkins was born on Jan. 12, 1960, in Paris, France, where his father was stationed in the Air Force. And — get this — his first name is Jacques.

Growing up, Wilkins was a star player on his high school basketball team in Washington, North Carolina.

Whatever he was doing, it worked.

He later went on to play three seasons for the University of Georgia where he averaged 21.6 points during his career there.

In 1982, Wilkins was drafted by the Utah Jazz during his junior year of college.

“One of the reasons why I came out early is because the Lakers said if I came out early is that I’d be the No. 1 pick,” Wilkins said of the draft. “I said, ‘Whoa, L.A. Lakers? Yeah, I’m coming out.’ But Mitch Kupchak got hurt, and they had to go with a bigger small forward.”

He turned down the offer from Utah Jazz, and instead he joined the Atlanta Hawks later that same year.

During his basketball career Wilkins gained notoriety for high scoring games, especially when he scored 29 points in only 30 minutes of play during the All-Star Game in 1988.

He’s been dubbed “The Human Highlight Film” for his highlight-footage-worthy dunks and moves on the court.

In game seven of the 1988 Eastern Conference SemiFinals against the Boston Celtics, Wilkins and another legend Larry Bird traded basket-for-basket to keep their teams in the game.

And it was epic, he said.

“When you have a guy that has the same will that you have, it’s set up for one of the greatest games ever,” Wilkins said. “And it was. It was one of the greatest games ever in the playoffs in the seventh game, where you had two guys who did not want to lose. I said, ‘Well, if he’s going to continue his shots, then I need to do whatever I can to keep us in the game.’ And it went toe-to-toe. And it came down to virtually the last shot.”

The Celtics won the game 118 to 116, but the battle between Bird and Wilkins was set in NBA history.

And Wilkins has still got it. He just won his third “Degree Shooting Stars” competition that kicked off the 2015 NBA All-Star game on Valentine’s Day.

Wilkins is currently serving his ninth season as vice president of basketball for the Atlanta Hawks, which have had a record beating season this year winning 19 games in a row.

“It’s so much fun, and the city deserves this,” Wilkins said of the Hawks. “The players deserve this. To see where we’ve come from last year and some of the things that have happened this year. And to stay above everything, to get to a common goal: and that’s to win. And you’ve got to give the team and coaching staff so much credit because they’ve stuck to a system, and it’s paying off.”