The atmospheric pattern known as El Niño is officially here, and there’s some good news for Georgia.

El Niño happens when the temperature of the Pacific Ocean around the equator is warmer than average. It was almost warm enough for months, and now it’s finally there. The National Oceanic and Atmospheric Administration (NOAA) declared on Thursday that El Niño had arrived.

A strong El Niño generally means wet winter weather here in the Southeast. But this is a weak one and it formed late.

“It could have a bearing a little bit as we get toward summer,” said Bill Murphey, Georgia’s state climatologist. “But as far as widespread impacts between now and then, not a lot different than what we’ve already been in.” 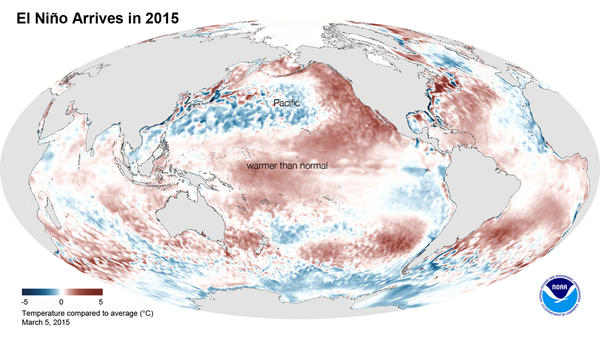 NOAA forecasters said that it’s likely that El Niño will continue through the summer. And there’s a positive flipside to that: Murphey said there’s a near-zero chance of La Niña forming this summer.

“That’s actually good for Georgia,” he said. “Because typically in the La Niña conditions, that’s when we get, you know, significant drought development.”

La Niña happens when sea surface temperatures in the Pacific are below average.

A stronger El Niño is also associated with a calmer hurricane season. But Murphey cautions there’s a lot more going on in the global weather system.