Emory University Hospital Wednesday said it will accept a patient into its Serious Communicable Diseases Unit — one of just four such outfits in the U.S. — who “may have been exposed to the Ebola virus.” 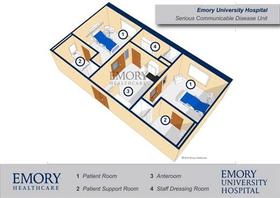 In a press release, Emory Health Sciences said the person is an American health care worker who had been in West Africa.  The hospital will monitor the unnamed patient “to see if an infection has been acquired.”

Emory declined to give a time of the patient’s arrival or any further details.