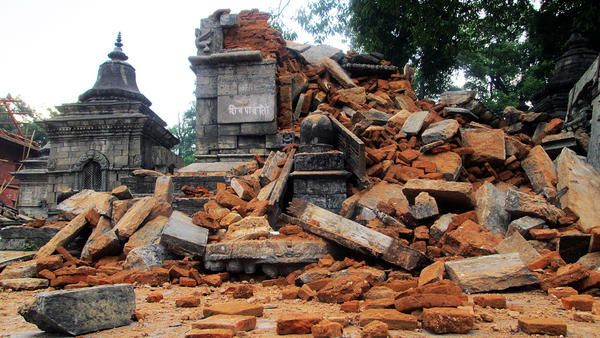 The 7.8-magnitude earthquake that hit Nepal two weeks ago devastated the country.

The death toll has risen to over 8,000. Water and basic essentials remain scarce in the country, and aid workers report that they have received a fraction of the aid that they need. The quake also reduced many of the Kathmandu’s temples and other Buddhist and Hindu structures to rubble.

Nepal sits at the intersection of China, Tibet and India with these traditions in conversation for hundreds of years. Nepal was a site for great creativity and cultural development, initially as a Buddhist center and then as in Hindu one when Nepal transformed into a Hindu state.

Even with two prevailing religions, Carol Worthman, anthropology professor at Emory University, said that Nepal is a tolerant society. Buddhist and Hindus alike visit the stupa, which are Buddhist meditation sites.

“The daily processions of Buddhist devout are joined by equal numbers of Hindu, who are interested and always open to this religious tradition, which they see springing from their own and very much related to their own,” Worthman said.

Worthman highlighted how the temples go beyond just religious importance for the people of Nepal.

“These buildings are important parts of the urban landscape and an important part of the identity of Nepal and its attachment to the best of its history in the sense of cultural expression,” she said.

Also, in conjunction with the United Nations, many of these temples were restored over several decades. UNESCO Heritage Sites like the Pashupatinath Temple crumbled during the earthquake.

The buildings were also economically important. Each year, they drew tourists from around the world to visit.

“When they come to Kathmandu, they see a city of great change, but they also see, or saw, this city with extraordinary sites to visit,” Worthman said. “Both the immediate devastation and the medium term will heavily erode their important source of income.”