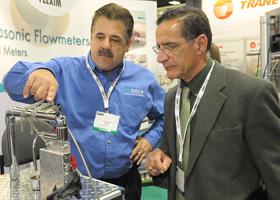 At the 35th annual World Energy Engineering Congress, held this week at the Georgia World Congress Center in Atlanta, companies from all over the world showed off the latest advances in green technology – from cheap, long lasting LED lights to ultra-efficient heating and air conditioning systems to cloud-based energy monitoring software.

In between the sales pitches and Powerpoint presentations, some industry professionals expressed frustration about the pace in which Georgia and other states were adopting new technologies.

“We need a wake-up call. It’s like we have blindfolds on,” said Al Thumann, executive director of the Association of Energy Engineers, which organizes the conference.

“Georgia is one of the lucky places that traditionally has a low cost of energy so the awareness isn’t as high here as it is, for instance, in California or New York City where you have energy costs two or three times the rate,”

Couple that with the sluggish economy and less available financing and experts say conditions here in Georgia haven’t been conducive for a broader transition.

“Most of them are scrambling to stay in business. They don’t have a lot of time to devote to energy efficiency even though the savings could be there to have a simple pay back in two years or less,” said Morton.

But over the last few years, Georgia utility customers have seen their bills steadily rise to pay for basic electricity use, a new nuclear project near Augusta, and, up until recently, rising fuel costs.

“I thinking we’re gaining more and more who say, hey, this is a good idea. This will be something that pays for itself in five years or seven years or whatever the magic number is,” said Tim Echols, a Georgia public service commissioner.

Echols is a solar advocate who drives a natural gas-powered vehicle. He’s also a Republican who doesn’t want the transition to come by federal mandate. Rather, he wants the state to take a more active role through tax incentives and education programs.

One proposal heading into legislative session is a sales tax exemption on solar projects. Something similar was passed last year for manufacturers on electricity purchases and the solar industry is looking for similar treatment.

“It doesn’t ask the state for anything out of the state coffers that they’ve already collected, which a tax credit might,” said Anthony Coker, board chair of the Georgia Solar Energy Association. “This would just be another way to incent economic development.”