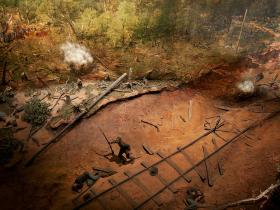 As many already know, the city’s Cyclorama could be moving from its longtime home in Grant Park to a new facility at the Atlanta History Center. The move–part of a deal announced by Mayor Kasim Reed last month–now awaits the approval of the City Council.

It’s expected to take two years to move the massive panorama painting, depicting the Battle of Atlanta. But, according to ArtsATL.com Executive Director Catherine Fox, once the Cyclorama is in its new home, visitors will learn much more than the story of the Atlanta campaign.

In a recent piece for the arts site, she writes that the history center could give people the chance to consider the greater cultural meaning of the painting and how that has evolved since it was first completed in 1886.

She joined City Cafe host John Lemley in studio to discuss the different ways the painting has been interpreted throughout history and how its cultural significance continues to change even today.