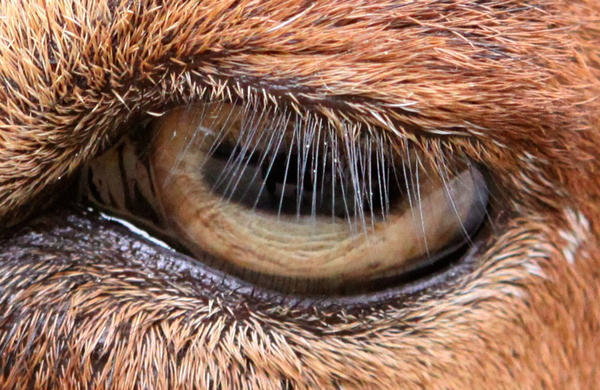 Georgia Tech researchers recently spent a lot of time gazing deep into different animals’ eyes. Actually, they were studying their eyelashes, and they found that eyelash length is something we all have in common.

“So there’s a huge difference, and they’re very diverse animals. But we always found the same length with respect to their eye opening,” Amador said.

The length always ended up being about a third of the width of the eye, he said. “There’s a very consistent trend.”

Amador tested that eyelash-eye ratio in a wind tunnel, and found that it was good both for keeping eyes moist, and for directing wind and dust away from the eyes. That could be useful for designing protection for sensitive instruments that operate in dirty environments.

“You have the Mars Rover that has to be in a very dusty, arid environment when it’s up on Mars,” he said. “So we try to look at how nature has solved this problem of living in a dirty environment.”

Figuring out that ideal length that helps protect the eye could also help people who don’t have eyelashes, and who want to wear fake ones, said Amador.

And then there’s those fake eyelashes people sometimes put on their car’s headlights. “After the study we started noticing them,” said Amador. “And we were like, ‘Oh, maybe they won’t have to wash their headlights as often as other people.’”

The paper was published online on Wednesday.