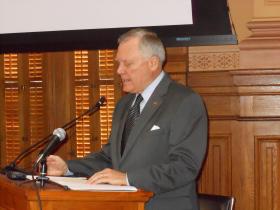 Georgia Governor Nathan Deal confirmed Tuesday that he and Atlanta Falcons team officials are trying again to reach a deal on the financing of a proposed new downtown stadium for the team.  WABE’s Denis O’Hayer reports.

The talks hit a snag last week, the Governor asked the Falcons to reduce the size of their request for the public share of the money—from $300 million to $200 million.

Tuesday at the State Capitol, the Governor said the Falcons’ $300 million request seemed, as he put it, “like a little bit of a high number.”

“Many people recognize the validity of what they (the Falcons) are advocating,” the Governor said.  ”And my concern is to save the taxpayers, in terms of their commitment to the taxpayer side of the agenda.”

If the state insists on $200 million as the taxpayers’ share, the Governor admitted he doesn’t yet know what other sources could be used to raise the remaining $100 million, to satisfy the Falcons.  But he hinted one key would be for the team to repeat its commitment, made in the first round of talks, to stay downtown.

“The argument is, do you spend millions of more dollars on repairs–and at some point having to replace the current Dome roof, which is a major expenditure–or do you go ahead and make an investment now that will be good for 20 years, and we’ll have a commitment that the Falcons will remain for that period of time in Atlanta, Georgia.”

The total cost of the stadium project is estimated to be at least $1 billion.  The Governor said he did not know how long the new round of talks might take to produce an agreement.