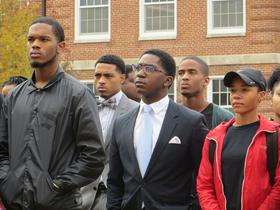 The group #ItsBiggerThanYou has been protesting since August ─ forming human chains across Interstate 75 and even shutting down holiday traffic in front of Lenox Square Mall.

Yet during a recent meeting it’s not the next demonstration they’re talking about, it’s something they call “self-care.”

“Your self-care is not based on a want ─ it’s based on a need. Is everybody clear about that?” said Anana Parris to a room full of over 50 people.

Parris works at a local law firm and was one of many speakers at the group’s event.

Others talked about self-care through juicing, meditation and reflexology.

#ItsBiggerThanYou started this event last November after realizing many of its members felt burnt out.

“It’s easy to plan protests and demonstrations and then not sleep at night because you’re just ready to go ─ you’re revved up,” said Aurielle Lucier, a co-founder of the group.

She said some members have told her they had to take a break from Twitter and Facebook ─ they call it a “social media cleanse.”

“It’s important and it’s not just an indulgence,” said Lucier. “It’s not because I think of myself so great, or I think I’m deserving of all of this pampering and respect. We’re talking about giving ourselves the essential needs that our community has not always been told that they are worthy of.”

This idea of self-care isn’t some new trend, in fact, it dates back to the civil rights era.

“Martin Luther King used to retreat to what I would call “safe spaces” in order to counteract the pressure and the stress of being involved in a very intense, ongoing civil rights movement,” said Nathan McCall, an African-American studies professor at Emory University.

He said one of those “safe spaces” was here in Atlanta, at the home of Herman J. Russell, a black multi-millionaire.

While King would spend time with friends like Russell and Harry Belafonte to relax, it wasn’t something he publicly talked about.