People experiencing food insecurity – not knowing where their next meal will come from – mostly live around downtown Atlanta and south of I-20.

But that’s changing. A new analysis finds that food insecurity will increase more quickly in the suburbs to the east and west as numbers decrease in-town.

That’s not really surprising, said Jerry Shannon, a geography professor at the University of Georgia. He said it matches the general pattern of increasing poverty in the suburbs, as in-town real estate gets more expensive.

“When we think about food insecurity and hunger, we often think about it coinciding with poverty, and we tend to think of central core cities as being the home for that,” he said. “But there’s been now a couple decades of research showing poverty itself increasing in suburban areas.”

Shannon collaborated with the Atlanta Community Food Bank for his study, which will be published soon by the journal Professional Geographer. In it, he maps areas where he expects to see more people who need food in the next few years.

“Really what you see is it’s the outer suburbs,” he said. “It’s those places where land prices, housing, is relatively cheap still where people are moving because that’s where they can afford to live.” 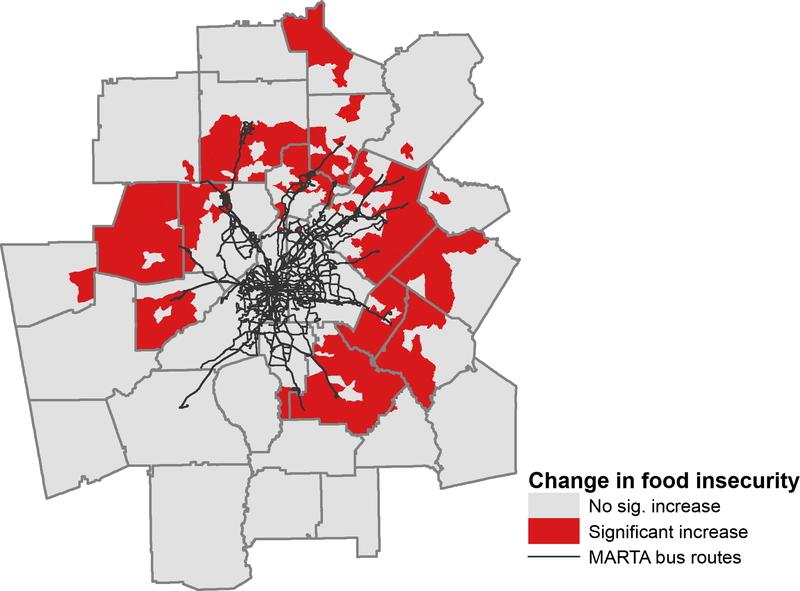 That can come with a trade-off, though, since a lack of transit in those areas means people may have to choose between spending money on gas and on food, said Shannon.

“As a region, we have to think about things like transportation and how we can make food more accessible in food deserts,” Waide said.

He said it can be hard for counties where there is a relatively rapid increase in food insecurity to respond quickly, with resources at hospitals, for instance, or more free and reduced lunches at schools. Programs like WIC and SNAP can help, he said, plus the food bank, which serves more than 20 metro Atlanta counties.

The analysis from UGA is helping the food bank decide how to allocate resources and plan for the future, Waide said.

“It’s not a problem that lives somewhere else affecting some other group of people. It’s right next door to all of us. And it affects our neighbors,” he said. “At the end of the day, our region, we are all responsible for that issue.”