A coalition of groups including the Georgia Federation of Teachers, the League of Women Voters and the AFL-CIO publicly opposed Gov. Nathan Deal’s school takeover plan Tuesday. The Georgia Legislature passed the measure last year. If voters approve it in a November referendum, the state constitution will be amended to include it.

It’s too late to change the legislation, which creates an “Opportunity School District” to manage so-called “chronically failing” schools.

But Charlie Flemming, president of Georgia’s AFL-CIO chapter, said it’s not too late to plead with voters.

Although Georgia has a majority Republican legislature, Flemming said several groups were unsuccessful in urging Democratic lawmakers to vote against the measure last year. 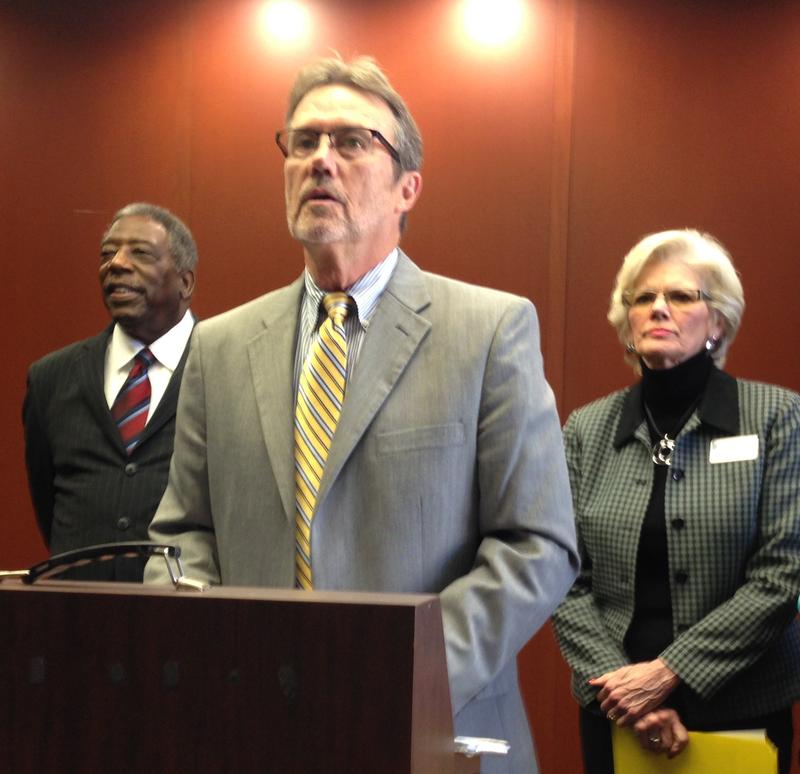 “We did try to talk to our legislators, and quite honestly, I’ll go on record: the labor movement had some friends in the Democratic Party that turned their back on public education,” he said. “We’re extremely disappointed. They voted for this takeover and they will not get labor support in this upcoming election.”

Under the proposal, tax revenue that would normally go to the under-performing schools would be diverted to the Opportunity School District, or OSD. The Rev. Tim McDonald, of First Baptist Iconium Church, said he thinks that’s why so many lawmakers supported the plan.

“They want control of that money,” he said. “Don’t be deceived that they talk about our children. We all love our children. That is not their primary interest.”

Senate Democrats introduced a bill last year that outlined an alternative plan, which would have provided more support services for students — both in and out of school.

“If the governor is serious about providing a real opportunity for Georgia students, he should be focused on ways to address the out-of-school factors that cause our children to have difficulties learning,” she said.

Some opponents of the plan are worried about the language on the ballot that will go before voters.

The proposed amendment states: “Shall the constitution of Georgia be amended to allow the state to intervene in chronically failing schools in order to improve student performance?”

Critics say that doesn’t describe what the plan would actually do. They also bemoaned a loss of local control of schools they say would occur should the measure pass.

The governor’s office issued the following statement about the OSD plan:

“Gov. Deal is adamant in his belief that a child’s zip code should not determine the quality of his or her education. In schools where students can’t read and can’t catch up, they don’t graduate. In turn, students who don’t graduate are much more likely to live in poverty or be incarcerated. Improving educational outcomes, and breaking negative economic and life cycles, will provide these students with much brighter futures. Creation of an Opportunity School District (OSD) would allow the state to help rejuvenate chronically failing public schools and provide their students access to a quality education. In fact, the potential creation of an OSD alone has spurred a new sense of urgency in communities and school districts, where many are focusing additional resources and efforts on improving these schools and educational outcomes for their students.”