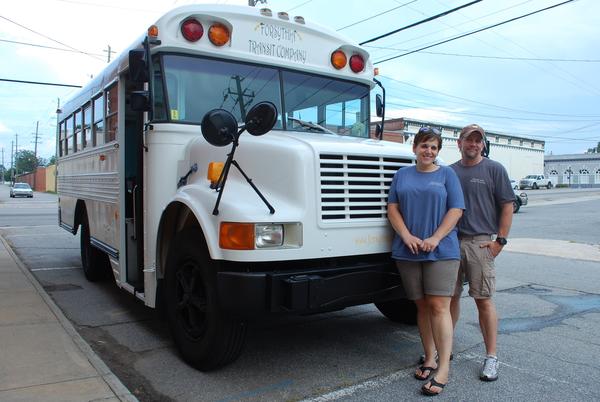 What do you do when you want to start a public transit service? Well, how about buy a bus?

Erin White, owner of the new Forsythia Transit Co., says she purchased an old DeKalb County Head Start bus off Craigslist. She refurbished it with her one employee, Jessee, who also happens to be her husband.

The once-yellow bus is now white with the company’s name printed in curly letters on the side. It doesn’t look much like the public buses you would see in cities like Atlanta, but that’s not really what they’re going for.

“We like it,” Erin says, “Hopefully, it’s friendly and people — I mean, I know that’s a strange word to say about a bus — but that people will not be intimidated and will want to try to ride it.”

Forsythia Transit serves Forsyth, a city of fewer than 4,000 people between Atlanta and Macon. Like many small Georgia towns outside the Atlanta area, it offered its residents few options for getting around other than driving a car — there have never been taxis or even a rental car service there, let alone a public transit system.

But earlier this year, Erin and Jessee decided they wanted to try to change that; they decided to start a bus service of their own. And they quickly learned, when you’re a newcomer in a small town, looking friendly is important. WABE checked in on their small-town bus experiment a couple months after they were up and running.

On a narrow residential street, Erin and Jessee pick up one of their new regular riders, Dorathy Reynolds. She’s one of Forsyth’s residents without a car. Some residents can’t afford one — the median household income here hovers around $20,000 (according to 2013 Census data).

However, Reynolds says she just doesn’t want to drive. So, to get to work at a nearby hotel, she used to pay a neighbor or just walk. But now she’s all about the bus. 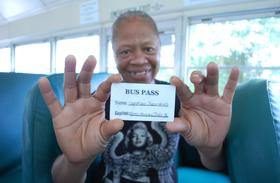 “This saved me a lot of time. He tell me he says, ‘I’ll be there,'” Reynolds says. “He be right there waiting on me.”

Reynolds even bought a weekly pass, which is basically a laminated piece of paper with her name on it.

Now, she says she’s looking around her neighborhood to see if she can spread the word.

“I want to try to get that place for him, that trailer park right there,” Reynolds says, “Cause I got a couple girls that work with me, but they walk home.”

For Erin and Jessee, it’s been tough getting people to take the bus. Many stare, or maybe wave. But few are like Reynolds and have actually tried it out.

“We, originally, our signs, you know, we had a little map of the town, and we had designated times and things,” Jessee says. “We’ve had that going on for almost a month and we see that’s not working. The people, they’ve never had a bus before so they don’t really understand how that works.”

The couple admits, they’d never heard of anyone trying to start a small-town bus service like this, with regular routes and all. But after working high-paying jobs that kept them far from Forsyth, Erin and Jessee wanted to finally invest in the community.

And Erin says, they heard from the town’s small businesses that a bus was something that could work.

At a local pizza shop and pub, just outside the town’s historic square, owner Bonnie Barker once debated whether to serve alcohol. Because again, Forsyth has no taxis or, in other words, no safe way for a person to get home.

“They’ve given us a whole new way of looking at our business plan,” Barker says.

Now with a bus, Barker’s talking about wine tastings, whiskey dinners. And she doesn’t just have the town’s residents in mind. There are two big statewide training centers in Forsyth — for correctional officers and public safety employees — that bring in thousands of visitors.

“I think what they’ll find is, as they do this, that if they know that people can come into town, that more of our businesses will stay open in the evening.”

Barker thinks Forsythia Transit could help revitalize a town that once depended on mills and agriculture. But for that to happen, the bus does have to stick around.

“I’m hoping they have the patience to hang in there because in a small town you have to keep doing what you’re doing until you become part of the fabric of the town.” 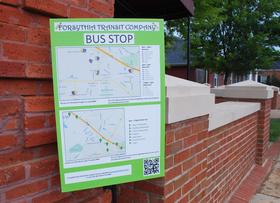 For now, Erin and Jessee are hanging on, but they’ve had to make some changes. They stopped servicing the routes; it was too expensive to drive an empty bus around town.

While they’re still taking Reynolds to work, they’re marketing themselves as more of a bus for hire — for things like special events — and they’re also using their commercial driver’s license to do some food deliveries for local restaurants like that pizza shop.

So, in the end, they don’t have much of a public transit service — at least, not yet. But they’re filling the needs of a small town however they can.