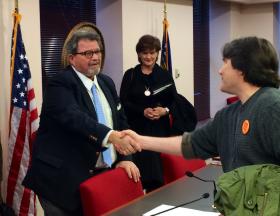 The state House is trying to force the hand of their Senate colleagues on sweeping gun legislation.

In a surprise move Tuesday, the House removed a provision that would have reduced the penalty for gun permit holders if caught carrying on a college campus. Then, it attached that bill to a separate piece of legislation and sent it to the Senate for an immediate floor vote.

The procedural maneuver came just as a Senate committee convened to take up House Bill 875, which the House approved overwhelmingly last month. The bill calls for expanding gun carry areas to churches, bars, and any government building that doesn’t already have security. It also would decriminalize campus carry and reduce the penalty for carrying in airports if done accidentally.

The House added that legislation to HB 60, a less notable bill that would allow certain judges to carry firearms. HB 60 had already cleared the House and Senate with only minor changes. When HB 875 was attached, the provision that decriminalized campus carry was taken out. (For the revised bill, click here). The amended HB 60 now goes directly to the Senate for an up-or-down vote, and bypasses the Senate committee process altogether.

“The House has passed three bills in the last two years and they have either got tied up or somehow they mysteriously fell apart. Well this way there’s no running and no hiding anymore,” said House Public Safety chair and HB 875 co-sponsor Alan Powell, R-Hartwell.

In the final hours of last year’s session, the Senate balked at a similar bill that included campus carry. That was after college presidents spoke out strongly against it.

He added the revised bill also includes a new appeals process for those deemed mentally unfit for permits, as well as language that gives local governments more flexibility over whether to allow guns in their buildings.

As a result of the procedural move, the chairman of the Senate committee vetting HB 875 said it’s unlikely the bill will now move out of the committee. Instead, the focus will be on HB 60.

“In this late date in the session, it will be easier for us to focus on one bill,” said Jesse Stone, R-Waynesboro.

But rather than simply agree to HB 60, Stone believes his Senate colleagues will likely send the bill to conference committee.

“If there’s a disagreement, there will be a conference committee. That’s where the disagreements can be worked out,” said Stone.

He made the comments Tuesday evening after listening to more than three hours of testimony on HB 875.

The committee heard from bill opponents like Lucia McBath, the mother of Jordan Davis. Davis was a 17 year-old who was born in Georgia and was shot and killed in Florida during an argument over loud music.

“It would  be a terrible mistake to expand the law in this way. It would only feed a culture that encourages gun violence and would only lead to more senseless tragedies like mine,” said McBath.

The committee also heard from those in favor of the bill like LaDonna Lowe.

“Citizens who have a Georgia carry license have been vetted. They have been thoroughly vetted by the FBI, the GBI, and we have been fingerprinted. We’re honest citizens who only want the right to defend ourselves and our family.”

If the revised bill does head to conference committee, Stone said the sticking points will likely be over provisions to allow permitted gun owners to carry in bars and churches.