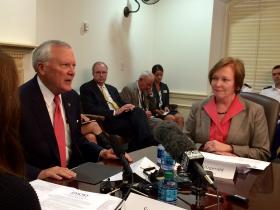 Georgia health officials say the state has already begun a three-week monitoring requirement for travelers arriving from the Ebola outbreak zone in West Africa, and is currently tracking around two dozen people.  As heard on the radio

The move comes prior to the Atlanta-based Centers for Disease Control and Prevention’s announcement Tuesday to now require all travelers from Liberia, Sierra Leone and Guinea be monitored for signs of the virus for 21 days.

State Department of Public Health head Brenda Fitzgerald Tuesday said finding the people who need monitoring begins at Atlanta’s Hartsfield-Jackson International Airport, one of five airports travelers from the affected region now must fly through for screening before entering the U.S.

“They are given instructions and, quite frankly, a thermometer, and we will be checking in with them twice a day on both symptoms and on their temperature for 21 days,” she said.

Fitzgerald said the state has been tracking 20 people since last Thursday, none of which showed any Ebola symptoms or are considered high risk.

She said travelers are responsible for checking in with state health officials, but says an online self-reporting tool is in the works.

“And if they don’t electronically enter,” she said, “we’ll be calling them.”

The CDC said Georgia is one of six states where the majority of travelers from the three Ebola-affected countries are headed.

CDC said about 70 percent of travelers originating from the outbreak zone are headed to either Georgia, New York, Pennsylvania, Maryland, Virginia or New Jersey, and that those states had already began to put a monitoring plan in place.

The federal government is required to notify states when a passenger from one of the three countries arrives, and CDC officials are providing assistance with the new monitoring requirements.

Fitzgerald said state health officials will also notify other state departments should a passenger travel on from Georgia.

Hartsfield-Jackson Manager Miguel Southwell said only about five passengers a day come from the affected region, so the new measures aren’t a strain.

“This is just an additional precaution that we’re taking,” he said.

The passenger-monitoring program is expected to roll in the rest of the country starting Monday.