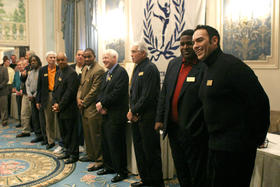 Rocker’s new title came after his first season at Georgia, following three years as defensive line coach for the NFL Tennessee Titans. Rocker, a former Auburn standout, was inducted into the College Football Hall of Fame in 2004.