Michelle Nunn, the daughter of former Georgia Democratic Senator Sam Nunn, has said she’ll run for the state’s open Senate seat in 2014. Upon hearing the news, the Georgia Republican Party issued a welcome letter to Nunn [full text below].

The letter says the state GOP looks forward to “creating a stark contrast between [Nunn] and her far left-wing beliefs and those of [her] Republican opponent.”

Georgia Democratic Leader Stacey Abrams responded to that description of Nunn, who has pledged a centrist position.Click to hear an audio version of this story. 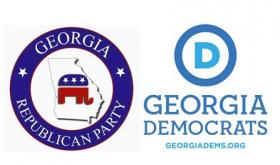 “I find it very telling that the Republican Party believes that reducing our deficit is far left-wing thinking, that engaging citizens in service is radical, and that it’s entirely too liberal to be focusing on how we ensure our children’s future,” Abrams said.

The letter goes on to say Republicans will make Nunn’s Senate campaign their priority and will “work to remind Georgia voters how out-of touch she and the Democratic Party are with their values and convictions.” Abrams dismissed that characterization.

“The Republican response is not an actual response to what she has said and what she’s done,” Abrams said. “It’s against this mythical, and I would say, arguably, very strange creature who doesn’t think we should balance our budget, engage our citizens, and do right for our state.”

Nunn will face physician Branko Radulovacki and ROTC Director Todd Robinson in the Democratic primary. The winner of that primary will face the winner of the Republican race, which includes former Secretary of State Karen Handel and Congressmen Paul Broun, Phil Gingrey, and Jack Kingston.

The full text of the GOP “Welcome” letter to Michelle Nunn:

Welcome to the race! We appreciate your willingness to offer yourself up for public service and look forward to creating a stark contrast between your far left-wing beliefs and those of your Republican opponent.

Even though the General Election is more than a year away, you can rest assure that the Georgia Republican Party will make your campaign for the United States Senate our priority, and we will work daily to remind Georgia voters how out-of-touch you and the Democratic Party are with their values and convictions.

We wish you safe travels as you venture outside of Atlanta on your tour of the state. Don’t forget your map!

PS: Thanks to your friend President Obama, a tank of gas costs an “arm and a leg” these days (which is NOT covered by ObamaCare) so don’t forget to cash those fat checks from your liberal buddies in Washington before you hit the road!