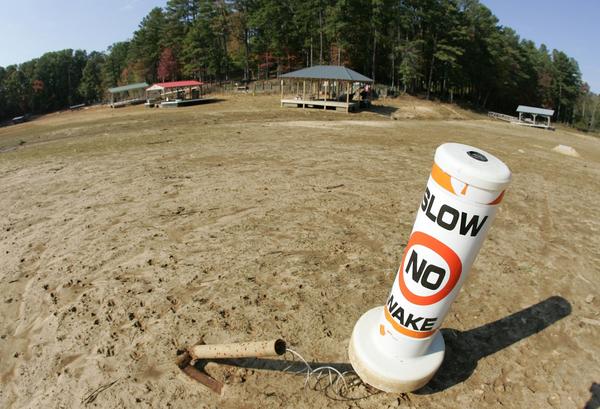 California will start to enforce new water restrictions in response to the drought that’s dragged on for four years. Georgia isn’t in a drought now, but state officials are preparing for the next one.

Earlier this week, the Georgia Department of Natural Resources released updates to its drought rule that would dictate how droughts get declared and what happens when they do.

“We need to have one so that we’re ready in case we do have a drought,” said Jac Capp, the chief of the Environmental Protection Division’s water branch. “And we want to continue to be good stewards of the water resources that we have.”

The last severe drought in Georgia was in 2007 and 2008. This updated rule would clarify how the state responds to future droughts.

One example: The earlier version of the rule stated that the director of the Georgia EPD is responsible for declaring a drought. The new version is more specific and says that in order to make the declaration, the EPD should monitor indicators such as precipitation, stream flow, groundwater and reservoir levels.

The rule also outlines responses once drought is declared. There are three levels of response; the first just requiring public notifications that there is a drought. The more stringent levels could limit things like outdoor watering and street cleaning.

The rule also allows the EPD to call for “numeric reductions,” which would require cuts in water use by a percentage. It also gives space for some nuance: Drought could be declared for certain areas, but not others. And it could apply just to surface water or just to groundwater.

Water suppliers had some concerns about the rule when a draft came out last year. But Katherine Zitsch, the director of the Metropolitan North Georgia Water Planning District, said that she’s happy that the rule now includes water managers in drought planning.

“It demonstrates deliberation and transparency which is something that we see as important,” Zitsch said. “Not just so that we see what’s going on, but so that individual utilities can be providing to EPD what they’re seeing. And so it becomes a two-way discussion as we get into declaring drought.”

But the rule could be more stringent, said Gil Rogers, an attorney at the Southern Environmental Law Center.

He said he’d like to see more science baked into the planning. He also said he was concerned that when drought is declared, the emphasis is on decreasing outdoor watering, rather than regulating industrial uses. That was a problem during the last big drought, he said.

“You had things like outdoor nursery businesses going out of business because they weren’t allowed to water their products,” said Rogers. “And then you had other industries like power plants that weren’t expected to necessarily do anything at all.”

The Department of Natural Resources is accepting public comments on the updates to the rule. The agency will decide if it’s going to adopt the changes in June.