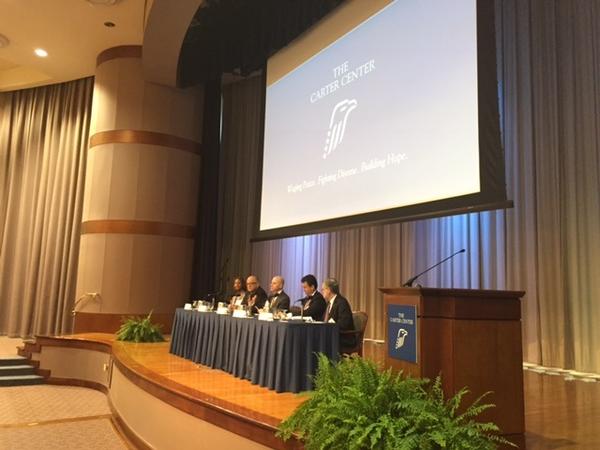 Georgia is in negotiations with the federal government over a 2010 settlement reached with the U.S. Justice Department. By June 30, the state was supposed to move all people with developmental disabilities out of state-run hospitals and into community settings. But the state is not going to meet to that deadline.

Since the state entered into a five-year settlement agreement with the federal government, nearly 500 people with developmental disabilities have been transferred out of state-run psychiatric hospitals and into the community. But about 268 Georgians with disabilities remain in those facilities.

During a Carter Center forum, Frank Berry, the commissioner of the Georgia Department of Behavioral Health and Developmental Disabilities, spoke about why the state won’t meet the June deadline.

“Almost two years ago I had to stop transitions, because we were concerned about the quality of those transitions to the community,” says Berry.

During that time, several deaths occurred after those with developmental disabilities were placed into community settings. The state has since resumed transfers on a limited basis, developed a new transitioning process and made a number of changes to the Georgia Department of Behavioral Health and Developmental Disabilities. Berry says the state is in discussions with the Department of Justice.

“As to what happens next? We don’t know,” says Berry.

Some advocates say things have improved drastically since the settlement began.

“We look at the progress that has been made, and we have a lot reasons to celebrate, but we do have a long ways to go,” says Thom Bornemann, the director of the Mental Health Program for The Carter Center.

Advocates say those challenges include: how to provide services for all those that need them, making sure once those with developmental disabilities are moved out of state hospitals they’re not segregated in the community. They also say more housing capacity is needed to serve those with disabilities and those living with mental illness.