And it means a death warrant is likely to be issued, but it’s not clear when the process will start. 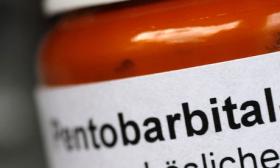 The request for the death warrant usually comes from the district attorney within the jurisdiction where the sentence was handed down.

In this case it would be Lee County, Georgia.

The next step, according to WABE legal analyst and criminal defense attorney Page Pate, is for a superior court judge to sign the death warrant.

“They will get the order signed and they will have the department of corrections schedule the execution.”

That sets a seven-day window in which the execution of Warren Lee Hill, Jr. could occur and Pate adds, “assuming there is sufficient drugs to perform the execution.”

And there is not.

Georgia’s department of corrections currently does not have pentobarbital in supply for executions.

A spokesperson for the DOC confirmed to WABE.

The emailed short statement went on to say, at the appropriate time, we will look into the procurement of the drug.

The supply Georgia did have expired March 1st of this year.

That caused a delay in one of the scheduled execution dates for Warren Lee Hill, Jr.

The sole use of pentobarbital has come under scrutiny.

Opponents of its use say it causes pain during the execution.

However, there’s no concrete research that supports the claim.