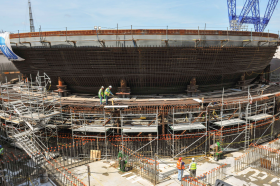 It’s the first state hearing on major cost overruns at Vogtle. So far, the project is 18 months behind schedule.

Georgia Power’s Kyle Leach took the stand and said a project of this size was bound to have some issues.

“We recognized and there was a lot of discussion around the risk of building new nuclear after 25-30 years since the last nuclear projects were completed. We did our best to assess those risks and understand those risk going in but we always knew they were there.”

Leach blamed the cost overruns on unexpected contractor issues that he said were outside the company’s control.

McKinney: Simply, someone made a wrong assessment.

Everett: So you think that’s prudent to make a wrong assessment?

McKinney: What I stated earlier was that I believe all the actions taken to resolve these issues and work through these issues were appropriate and reasonable.

Other contractor issues include paperwork problems and delivering parts on time.

Public Service Commissioner Tim Echols expressed concern ratepayers would have to pay so much.

“This is really serious that we’re going down this road and that the contractors and their errors are having such an impact on our ratepayers,” said Echols.

As a possible option, Echols referred to an agreement reached between Georgia Power parent company Southern Company and the Mississippi Public Service Commission. Southern agreed to absorb $540 million in cost overruns for a new carbon-capturing coal plant in east Mississippi.

“Is that something that you all are open to or talked about?” Echols asked company officials. Georgia Power’s Leach didn’t respond directly, only saying commissioners ultimately decide whether the company or ratepayers absorb new costs.

In any event, despite the cost overruns and delays, company officials insisted the two new reactors are still a good deal for customers.

“The economic analysis continues to demonstrate that completing this facility represents the best cost option for our customers,” said McKinney. “Even in the extended delay scenarios performed at the commission’s request the facility remains economic.”

He also said many of the contractor issues have improved since CB&I earlier this year acquired The Shaw Group Inc., a key part manufacturer on the project.

The hearings continue over the next two months and conclude with a vote October 15th.