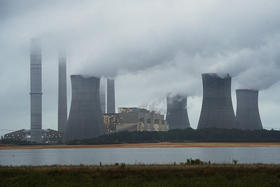 Georgia regulators are starting to wrestle with how to cut pollution from coal power plants. They have to in order to comply with controversial federal greenhouse gas rules. But until the final rules are out, the goal is a moving target.

“We don’t know what’s going to be in the final rule, or how the proposed rule will change,” said Keith Bentley, the chief of the air branch at the Georgia Environmental Protection Division. “We expect it to change because there were over two million comments filed.”

Georgia has a lot at stake under the Environmental Protection Agency’s proposed Clean Power Plan, which aims to cut the emissions that contribute to climate change. About a third of Georgia’s power comes from coal. The state is home to the biggest greenhouse gas emitter in the country – Plant Scherer, near Macon. And it’s one of the states that would have to cut emissions the most under the EPA’s proposal.

Georgia should be able to comply, according to environmental groups.

“We’ve preliminarily crunched the numbers, and through energy efficiency and renewables, Georgia can meet the mandate in a cost-effective manner,” said Ashten Bailey, an attorney at the Atlanta environmental law firm, GreenLaw.

This week the EPA pushed back the deadline for the final rule. Federal officials are now planning to release it this summer. State plans are due next year.

The state EPD is holding a workshop next week, for regulators and utilities to discuss some of the details.