A state lawmaker wants a committee to study medical marijuana in Georgia.  The proposed resolution comes after an insider advantage poll showed more than half of Georgia’s registered voters favor the legalization of medical marijuana for specific instances. It also follows publicity surrounding a 4-year-old Forsyth girl who suffers from uncontrolled seizures.

Janea Cox says her 4-year-old daughter Haleigh suffers up to 100 seizures a day.

“It’s hard to watch your child go through what she’s going through and not be able to do anything to help her.”

Cox says she and her husband have tried every legal treatment in Georgia and have even traveled to other states. But so far nothing has worked. That’s why Cox is planning to move Colorado.

It’s a state where a marijuana extract that’s low in the compound known as tetrahydrocannabinol or THC is legal. THC is the compound that’s psychoactive in marijuana. Instead, the extract is high in cannabidiol or CBD. Cox says the extract is given in an oil form and she’s hopeful it could help Haleigh. 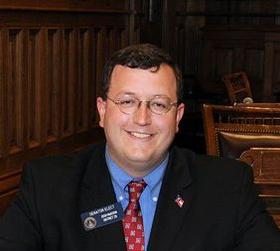 But Cox is also fighting to change Georgia’s law, because otherwise she says she and Haleigh will have to move to Colorado without her husband due to his job situation.

“We want it here in Georgia, because I don’t want to break up my family to go Colorado.”

Republican state Senator Josh McKoon of Columbus says he doesn’t support the recreational use of marijuana.

But he says his resolution would allow for hearings medical marijuana…which could result in recommendations and lead to legislation to legalize it in some instances as early as next year.

“I think everybody, at least that I’ve come in contact with, is broadly supportive of the idea that if people who are sick don’t have access to medicine we ought to make sure they have access to it. I think the question that we’ve got to spend a significant time answering is how we change our law to provide that access without having some unintended consequences that we don’t want.”

But Cox says the next legislative session is not soon enough for families like hers who are in danger of losing their loved ones.

After meeting with Haleigh in the hospital, Republican state representative Allen Peake has told several media outlets he plans to introduce legislation to legalize medical marijuana this legislative session.

WABE contacted Representative Peake but did not hear back by deadline.

The executive director of Peachtree Normal, Sharon Ravert, says her group has experienced opposition to its efforts to legalize of medical marijuana in the past from some Georgia lawmakers. But Ravert says recently nearly every lawmaker her group has spoken with say they are at least willing to hear more on the issue.

Currently, 20 other states and the District of Columbia now allow for the use of medical marijuana.