Need a detector for your gas grill to tell you when to turn it off? Or want to use your smartphone to learn and teach braille?

Undergrads at Georgia Tech have designed products to do just that. Next week, six teams will compete for a total of $35,000 in prizes to take their inventions to the next level.

“The person driving with drooping eyelids, they can’t even see the rearview mirror or the traffic signal, so they can’t see in front of them or behind them,” Najia says.

And when surgeons try to fix the problem: 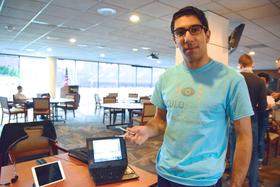 “They have to suture the inner eyelid and then free-hand cut away the excess muscle that causes the drooping,” Najia says.

Since they’re eye-balling it, many times, they cut off too much.

“And that leaves the patient with an abnormally short eye-lid, so functionally and cosmetically those are big problems,” he says.

So Najia and two other students designed a six-inch OculoStaple surgical clamp that looks like an oversized aluminum tweezer with a thin opening for a blade.

“So in one fluid motion, they’re able to safely cut away the excess muscle and seal the incision,” Najia says.

Other finalists in the Inventure Prize competition include: QuantaBrew, an airtight container that keeps coffee grounds fresh and dispenses the same amount every time; Eqip, an online audio effects marketplace; Haplit, an interactive tool to learn and teach braille; Shortweb, an information-sharing tool and Flame Tech Grill Defender, a safety device for gas grills.

Chris Reaves is one of the organizers of Inventure Prize. He says in the past few years, there’s been a lot of interest from Georgia Tech undergrads who want to start their own companies.

“It’s the implementation of those ideas and inventions into actual start-up companies that’s the difficult part,” Reaves says. “It’s not the invention itself, it’s how to execute it outside the boundaries of the campus.”