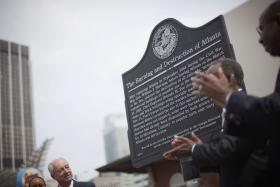 The Peach State is proud of its history.

Georgia has roughly 3,000 historical markers, which is second only to Texas for having the most.

And, there are plans to keep adding more markers throughout the Peach State.

Two new markers were dedicated earlier this month.  One recognized the Atlanta Student Movement, the other was for the Rush Memorial Congregational Church.

Another marker honoring the Savannah Sit-in Protest will be unveiled in early 2015.

“We’re also going to have one in the spring in Columbus, that talks about Primus King’s challenge to the White primary there,” says Christy Crisp, the director of programs for the Georgia Historical Society.

Although these markers represent the past, current technology can be used to find these locations.

The public can go to the Historical Society’s website to find markers that deal with specific topics, like the Civil Rights Movement.

“They can say, ‘You know, I’m traveling from Atlanta to Valdosta.  And I’d like to see some of these markers that are in-between those two places.’  And they can use the markers as way-points and create their own trail,” says Crisp.

The Georgia Historical Society is asking the public for suggestions on future markers.