U.S. Senate GOP candidate David Perdue and Gov. Nathan Deal won their races by margins sufficient to avoid runoffs.  Republicans were elected or reelected to every statewide position in Georgia. 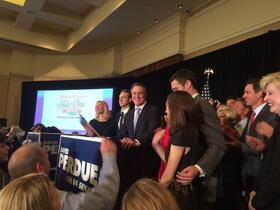 Michelle Nunn, running in her first election, was unable to find enough new Democratic votes to overcome the GOP advantage.  David Perdue won a seat in the U.S. Senate with 54.5% of the vote, thus avoiding a lengthy runoff election.  Nunn received 43.5% of the vote, while Libertarian candidate Amanda Swafford pulled less than 2% of the vote.  Perdue will fill the seat of retiring U.S. Senator Saxby Chambliss.

Nathan Deal was reelected Governor by almost the same margin as Perdue.  Deal received 54.3% of the vote, while Democratic candidate Jason Carter received 43.3%.  Libertarian candidate Andrew Hunt got 2.4%.  Deal, like Perdue, received more than 50% of the total vote and thus avoided a runoff.

With this win, Deal becomes the second Republican governor in a row to win reelection, following the two terms of Republican former governor Sonny Perdue. 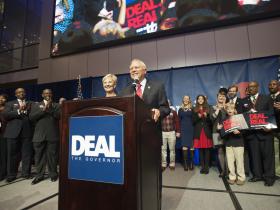 Throughout the campaign, Deal pushed his record of job creation and fostering a business-friendly environment.  He sidestepped questions about his involvement with the state’s troubled ethics commission, saying in an October debate, “We never have been indicted.”  And Deal hammered his opponent relentlessly on his relative youth and lack of experience.

Carter campaigned on funding the state’s K-12 education budget separately before funding the rest of the state budget.  This pledge won him the support of the influential Georgia Association of Educators.  At every opportunity, Carter worked to raise questions about Deal’s ethical issues.  He also attempted to blame Deal for the state’s high unemployment rate.  Jimmy Carter, Jason Carter’s famous grandfather, did a limited amount of campaigning for his grandson.

Perdue was able to tie Michelle Nunn to President Obama’s unpopularity.  Nunn, while getting some mileage by attacking Perdue’s outsourcing during his business career, was not able to overcome Perdue’s argument that Nunn would be an Obama enabler in Washington.