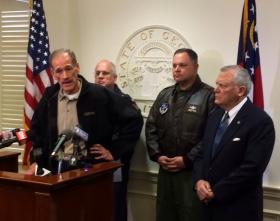 As metro Atlanta thaws, Gov. Nathan Deal apologized to those who were stranded on interstates or had children stuck at school.

He did so at an afternoon press conference Thursday.

“I want to start out by apologizing to those individuals who were stranded on the roadways, to those parents whose children were unable to return home in a timely fashion,” said Deal.

He said front-end preparations for the snowstorm were inadequate. He vowed to be more aggressive about weather warnings in the future. He also called for a full internal review of the state’s storm response.

“I’m not going to look for a scapegoat,” said Deal. “I’m the governor. The buck stops with me.”

Still, Charley English, head of the Georgia Emergency Management Agency, took responsibility for not recommending Deal take action sooner. He said he put the governor in an “awful position.”

“I’d like to say I made a terrible error in judgment late on Monday afternoon and early Tuesday,” said English.

After the 2011 snowstorm, GEMA was given more responsibility to coordinate action between state and local officials, including school districts. But English is under fire for not opening the GEMA operations center until as late as 3-4 p.m on Tuesday, after roads had already become dangerously clogged.

At a press conference the day before, Deal publicly contradicted English in saying roads were indeed gridlocked by mid-afternoon Tuesday.

To calls for the GEMA chief’s resignation, Deal said English would be critical to correcting issues in the future.

“We don’t just simply say, ‘you made a mistake. You go, take the blame with you.’ I don’t believe that’s the way to operate,” said Deal.

He said the focus now is helping people retrieve their abandoned cars. As of Thursday morning, there were about 2,000 left on the roads.