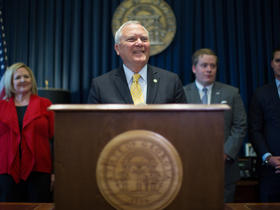 Georgia Gov. Nathan Deal is set to begin his second term in office today with an inaugural ceremony in Atlanta.

An afternoon ceremony is planned inside the State Capitol.

WABE's Jonathan Shapiro talks about the inauguration on “A Closer Look with Rose Scott and Denis O'Hayer.”

The governor and first lady Sandra Deal plan to started the day at a 9 a.m. prayer service at Mt. Paran Church in Atlanta.

An inaugural gala is scheduled for Thursday night with entertainment by country music artist Alan Jackson and other Georgia musicians.

Deal was re-elected in November, defeating Democrat Jason Carter in what he said was his final political campaign. The 72-year-old Deal previously served as a congressman.

The governor has said he will focus on a review of the state’s system for funding education and continue work on criminal justice.