Now that the 2014 legislative session is over, Governor Deal has numerous bills to consider signing including one that would expand gun rights in churches, bars and some government buildings. Deal did not definitively say whether he would sign that bill, but he alluded to the possibility by making positive comments about final language contained in the legislation. Deal also said he could use his executive powers on at least one issue that failed to gain passage.

Governor Deal would not say whether he plans to sign any legislation at this point. But Deal hinted he’s likely to put his signature on a gun bill passed by state lawmakers. 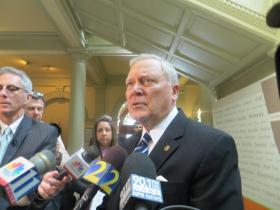 The bill would allow those with gun permits to carry guns in bars and government buildings without security. It would also give churches the right to opt-in.

“I will say on the gun bill, I was pleased with the reforms that were placed toward the end of the session. It makes it much more palatable to me and to many Georgians.”

Prior to its passage, Deal had expressed concern about language which would have made it easier for permit holders to carry guns on college campuses. That language was eventually removed. Deal also spoke about several bills which failed to gain passage, including legislation to privatize part of the state’s foster care system. Even though lawmakers were unable to reach an agreement, Deal said he could issue an executive order for a pilot program.

“I think the pilot project will give us a chance to expand the area of privatization and find out if there are problems associated with it, and then address those problems before it’s revisited in the next legislative session.”

Deal’s comments come after Senate lawmakers initially passed legislation which would have rolled out privatization efforts statewide. Governor Deal later announced plans for a Child Welfare Reform Council to review the state’s Division of Family and Children Services. That put the brakes on the Senate version. Both Chambers later passed legislation for a pilot program, but collectively could not reach an agreement. Meanwhile, Governor Deal also said he will explore what he or state agencies can do to allow those with seizure disorders to be able to legally gain access to an oil based form of marijuana prior to the next legislative session.

“It’s an issue that is on my radar screen and I will be talking with all of our state agencies that have any kind of involvement in dealing with this type of issue to see if there’s something we can do to make this treatment possible.”

But Deal said he’s unsure whether it’s within his jurisdiction to issue an executive order to accomplish that.