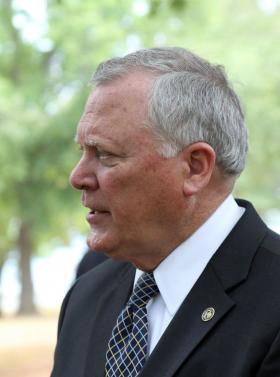 Gov. Nathan Deal has long said Georgia will not expand its Medicaid roles, citing long-term costs to the state. That’s the joint federal/state medical program for the poor.

To hear an audio version of this story, click the 'Listen' icon above.

But Deal seems open to consider alternatives now under consideration in Pennsylvania, Iowa and Arkansas — all three states that also denied Medicaid expansion.

Those states want to use federal Medicaid money to buy private insurance for those who would otherwise gain coverage under expansion.

In an interview with the BBC, Deal seems open to the idea:

“I’ve always thought it is preferable for people to buy into the private insurance marketplace, rather than being a part of a true government program.”

Deal says he’ll watch the other states’ actions, but stresses he remains “skeptical.”

Deal isn’t skeptical whether such an alternative might work; instead, he’s not sure the Obama administration is going about it correctly.

“If they’re going to allow those kind of changes in position, they need to go back to Congress and put them into statute and not simply try to do it by regulation,” says Deal.

Timothy Sweeney is Director of Health Policy at the Georgia Budget and Policy Institute, which endorses expansion.  He says about a half-million Georgians stand to gain health coverage under expansion. Whether that happens through Medicaid or a private insurer is less of a concern.

“It’s a positive sign that the governor is talking about these alternative expansion models in a way that he’s thinking about them,” says Sweeney.

The idea of using federal money to buy private policies is also on state lawmakers’ minds.

[Expanded health policy coverage on 90.1 comes through a partnership between WABE, NPR and Kaiser Health News.]