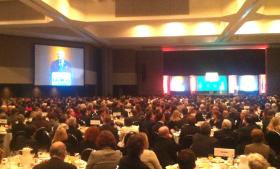 Speaking before hundreds of business leaders and lawmakers, Deal focused mostly on healthcare.

He reiterated his staunch opposition to two fundamental elements of the federal health reform law: the optional Medicaid expansion and the creation of a state-specific insurance exchange.

“While many federal programs come with strings attached, these strings turn states into marionettes to be manipulated by federal bureaucrats,” said Deal. “If there is one thing we don’t need, it’s another puppet show directed from Washington D.C.”

He warned of tough budgetary decisions to come as a result of the law and its mandates.

“I’ve been informed that from 10-14 hospitals will be faced with possible closure if provider fees do not continue,” said Deal.

The governor’s proposal effectively switches the assessor of the controversial fee – from the legislature to the Board of Community Health, which the governor appoints.

Deal said the board already administers a similar fee on nursing homes.

“It makes sense to me that in Georgia given the similarity of these two fees, we should house the authority and management of both of them under one roof, for efficiency and effectiveness.”

Introduced Monday in both chambers of the General Assembly, the fast-tracked proposal cleared a key Senate committee yesterday and is expected to come before the full Senate by the end of the week.

In a panel discussion at the breakfast, House Speaker David Ralston called the governor’s proposal “reasonable.”