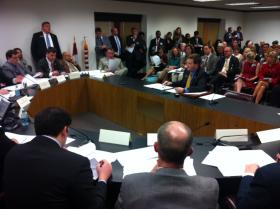 To help shore up Georgia’s Medicaid program, a Senate committee today approved a measure that allows a state health agency to levy a fee on hospitals.

Proposed by Governor Nathan Deal, Senate Bill 24 authorizes the Department of Community Health to impose its own version of the expiring hospital provider fee, commonly referred to as the bed tax.

David Schafer, the top-ranking Republican in the Senate and one of the committee members who voted for SB24, said the measure gives the state needed flexibility as budget conditions change in Washington.

“We don’t know about federal funds moving forward,”  said Schafer. “By delegating the authority to levy and remove the fee to the Board of Community Health, we can respond more quickly if those federal funds were not available.”

The Regulated Industries Committee passed the measure 11-3. It could come to a vote before the full Senate as soon as Thursday.

Lawmakers passed the provider fee in 2010 to prop up the state Medicaid program, which provides health coverage for needy patients. The fee is set to expire in June, but Governor Deal has said he wants it renewed.

Political observers suggest the governor’s proposal is getting fast-track treatment to avoid a bruising fight with conservative lawmakers who deride the fee as a tax on patients.

Senate Minority Leader Steve Henson was one of three committee members who opposed the measure, calling it a baldly political move. He said the larger issue of Medicaid funding deserves a more deliberative process.

“This was brought to us in superfast order. People haven’t had a chance to review it,” said Henson. “We need to have a broader discussion. Were there other ways to raise revenue? We could do a tobacco tax. We could raise revenue in other ways but people aren’t willing to engage in that.”

If passed in current form, the bill would permit DCH to levy the fee for four years. During that time, the legislature could challenge and overturn any fee proposal.