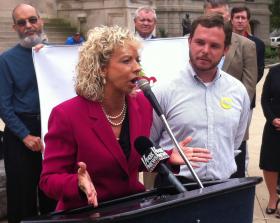 The Green Tea Coalition held a rally Tuesday on the steps of the state Capitol.

The group, which officially formed last month, is coordinated by Tea Party conservatives, the Georgia chapter of the Sierra Club, and a private solar company. Its aim is to lower electric bills and add solar and wind options to the state’s regulated electric market.

Atlanta Tea Party co-founder Debbie Dooley said Georgia Power has profited from “captive ratepayers” too long. She called for an end to the company’s control of much of the state’s electric market.

“A monopoly is slavery, it’s servitude, it is not freedom and liberty and that’s something we need to understand.”

Dooley said she’s infuriated by a monthly fee she and other Georgia Power customers must pay to help expand the Plant Vogtle nuclear site near Augusta.

“I can tell you we regard that as an atomic tax that we are forced to pay,” said Dooley.”We want a free market system and we want to phase out all subsidies. And here’s a novel idea, let the market and consumers decide which energy they want to use. Not the government or a monopoly.”

The Sierra Club’s Seth Gunning laid out a ratepayer ‘Bill of Rights’ – basically a set of principles that will guide the coalition’s advocacy efforts.

Among them: ensuring accurate price information (for example, including monthly fees in the electric rate reported to regulators); protecting ratepayers from financial risk for big capital projects like the Vogtle expansion; and as Gunning said, “the right to not subsidize lobbying expenditures or political contributions made by the utility or utility representatives to any political campaign.”

State Rep. Jeff Chapman (R-Brunswick) also spoke at the rally and vowed to continue pushing for legislation that would limit Georgia Power’s profit on the over-budget Vogtle project.

Mark Williams, one of two Georgia Power spokespeople who peered on as coalition speakers railed against the company, insisted customers are being well-served.

“We do listen to anyone who wants to talk to us who has a concern. We’re very open and transparent. We are increasing our solar portfolio by a substantial amount over the next few years and we’ll continue to evaluate solar and other renewable energy options as they make economic sense for customers.”