From the outside, Gwinnett County’s Lawrenceville detention center looks just like any other jail: a multi-story concrete complex surrounded by barbed wire.

But inside its housing unit “One Charlie,” you’ll discover a scene that’s hardly typical of a county jail. 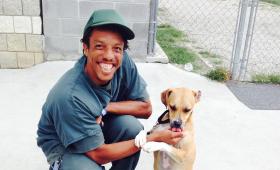 It was started by Dennis Kronenfeld, president of the Society of Humane Friends of Georgia. He finds dogs on the euthanasia list at Gwinnett County Animal Control, vets them and brings them to the jail.

Once at the jail, each dog is assigned an inmate handler. The handler then trains and socializes the animal with the help of professional dog trainers who come in several hours a week.  At all other times, the dog stays solely with that inmate, even sleeping in his cell, until the day it gets adopted.

Gwinnett County Jail began the program four years ago, and Kronenfeld and the coordinator Deputy Stephanie Martinez Peres believe it is the first of its kind in a jail. Though, according to them, prisons have been doing similar programs for some time.

At a jail – a temporary holding facility for those awaiting trial – a program like this can be a little more tricky. Inmates may only stay a few months or may have to leave unexpectedly. So, at Gwinnett County Jail, each dog has both a primary handler and a secondary one–usually someone who is newer to the unit. That way, if a primary handler leaves the jail, its secondary trainer is ready to takeover the training process.

The program is also highly selective. According to Peres, anyone with a history of violence or a sexual crime on his or her record is automatically ruled out. And even then, due to space constraints, only a tiny percentage of the more than 2,000 residents of Gwinnett County jail are able to take part in the program.

Since it first started, 215 dogs have been adopted. And they’ve also started a “jail kittens” program for a female unit in the jail.

Want to hear more? WABE’s Stephannie Stokes recently toured the program with Kronenfeld and brought back this audio postcard.

You can also check out the dogs and cats up for adoption.